PETALING JAYA: “Don’t send any more things. Send me volunteers so they can help me rebuild my place,” pleaded Salehin Ibrahim, the owner of a dog-friendly resort and campsite in the flood-devastated area of Hulu Langat.

Salehin’s property K-9 Cottage, which currently occupies an area of about 1.4ha, was destroyed during the Dec 18 floods when a swollen river and the following landslide swept away his toilet, kitchen, storeroom and gazebo.

The 59-year-old might have lost his life, too, had he not managed to cling onto a metal bar with two dogs that were boarding at his facility at that time.

Since his plight was highlighted on social media, many good Samaritans have come forward to donate dog food, water, dry foodstuff and other essentials like mosquito coils, solar-powered lights and also portable power banks because the property does not have an electricity supply. 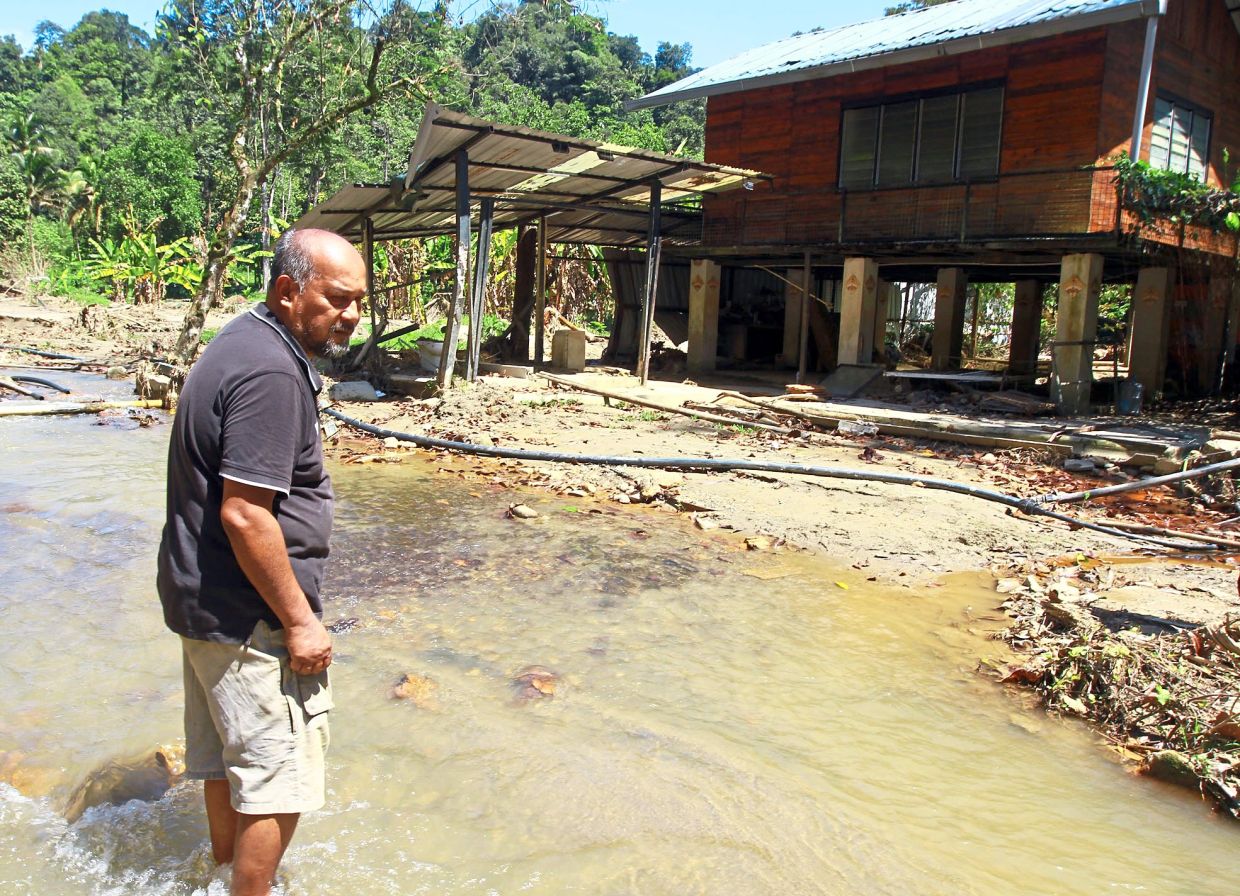 In ruins: Salehin looking in despair at what is left of his resort.

But with the entire property still in a muddy ruin, there is nowhere to store the donated items.

“I need volunteers who are not afraid of dogs to come and help to clear the debris first. Next, the house and dog kennels need to be cleaned up. Following this is the building of a fence,” he said.

The building of a fence, he stressed, is important in terms of security as he still has several dogs under his care.

He is unable to get the owners to claim their dogs as they are working overseas.

Another important aspect that must be looked into is a professional assessment of a slope situated just across a stream running behind his house.

“The force of the floodwaters has changed the direction of the river and I hope the authorities can do something about rediverting the river.

“If nothing is done, I fear that another flood may nullify all the efforts made by volunteers,” he said.

A visit to Salehin’s facility showed that much needs to be done.

In addition to donated foodstuff and other essentials, some seven tonnes of aggregate had been delivered.

A team of volunteers comprising a family and their two adult sons have helped Salehin lay the aggregate, creating a walkway from the entrance to the garden.

However, the house, kennels and the garden where a swimming pool for dogs is located are still in a mess.

Despite pleas from friends to move to a safer place, Salehin, a stroke patient, is adamant on staying.

“If I leave, who is going to care for the dogs? I also need to be here to prevent thieves from looting the place,” he said.

Scavengers had come to his place to rummage for scrap metal and had even slashed one of his dogs with a parang.

The stricken animal has since been sent to a veterinary hospital for treatment and is recovering well.

In the meantime, Salehin has given himself a deadline of six months to get his facility up and running again.

“Many well-wishers have visited me to assess for themselves the damage and see how they can help. So far, I have also received some RM20,000 from donors who sent the money to my bank account,” he added.

A former bank employee, Salehin spent his life savings of RM500,000 to build his dog-friendly campsite and resort in Sungai Lui five years ago.

He is renting the land from his friend and has signed a 15-year lease.

He has also exhausted his EPF savings after suffering from a stroke 10 years ago.