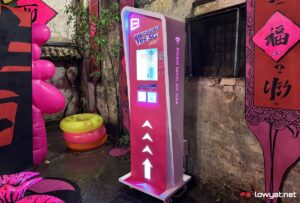 YTL Communications has begun rolling out Yes 5G WiFi Spot which essentially allows the public to try out the 5G network without signing up for a telco plan. Available for free, the first implementation officially went live earlier this week at the famed Kwai Chang Hong near Petaling Street in Kuala Lumpur.

Before we start, let me make it clear that when I said 5G, I meant the 5G wireless technology and not the Wi-Fi network’s 5GHz band. When I wrote about TM’s 5G-based free Wi-Fi service at MAEPS and Sungai Buloh COVID-19 Quarantine Centres back in April 2020, some readers thought I was talking about the latter which has led to a number of interesting conversations.

Almost three years have passed since then and I believe the public is already aware of the general differences between the two wireless network jargon. Nevertheless, just to avoid igniting any confusion once again, this is how a 5G-based public Wi-Fi hotspot like the Yes 5G Wi-Fi Spot generally works:

Now that we already clear that out (I hope so), let’s move on.

YTL seems to have a knack for implementing new wireless technology in heritage cultural areas as its new implementation at Kwai Chang Hong reminds me of the company’s collaboration with Facebook to deliver free public Wi-Fi service at George Town in Penang via Terragraph technology back in 2019.

Given Kwai Chang Hong’s proximity to our headquarters and my general curiosity in regard to the implementation of Yes 5G Wi-Fi Spot, I decided to pay a visit to the area last night. Furthermore, the new deployment also provides me with an opportunity to try out the Yes 5G Infinite Gateway for the first time since it was first launched in September as part of the Yes Wireless Fibre package.

This is exactly what ignited my curiosity: despite the Infinite Gateway being a consumer-level 5G CPE, it is the very equipment YTL used for its new public Wi-Fi hotspot implementation which I would deem as a commercial or enterprise application. Of course, it goes without saying that the company is definitely using its new 5G-based public Wi-Fi hotspot service to promote Yes 5G plans but still, it is a rather odd choice to me to utilise consumer-level equipment for this.

While I have no knowledge of the area footprint that the Infinite Gateway can cover, I doubt it is wide enough to cover the whole Kwai Chang Hong which is why it didn’t surprise me when YTL pointed out in its press note that the company installed three units throughout the area. Furthermore, each Infinite Gateway can only support up to 32 connected users at once.

Moving on to the actual user experience of Yes 5G WiFi Spot, it is generally no different from most public free Wi-Fi hotspot services out there. These services might be providing free Internet but they usually asked for the user’s contact details and it is no different for Yes’ implementation.

When you are connected to the service’s Wi-Fi SSID which is named Experience Yes 5G@KCH for the implementation in Kwai Chang Hong, you will be asked to input your name and e-mail. Once that is done, only then the full data transmission will start.

So, this is what the performance of the Yes 5G WiFi Spot in Kwai Chang Hong looks like according to Ookla’s Speedtest:

While the Wi-Fi hotspot throughput is generally fast but it certainly can’t beat the speed when I connect the HONOR 70 5G that I brought to Kwai Chang Hong directly to the 5G network:

As a comparison, here is the Speedtest result that I received when I connect the phone to the Yes 4G network:

For showcase purposes, I think Yes 5G WiFi Spot did its job but it only provides a glimpse of the high-performance nature of 5G since the hotspot throughput is much lower than a direct 5G connection. Then again, my Speedtest result did show that Kwai Chang Hong’s implementation is much faster than the 377Mbps average 5G speed mentioned by Digital Nasional Berhad on its website (as of 12:15 PM today).

At the moment, YTL has yet to fully reveal what it is going to do with Yes 5G WiFi Spot as the company has not announced any rollout targets or timeline for the public free Wi-Fi hotspot service. In fact, the press release from earlier this week [pdf] focused more on the partnership with Kwai Chang Hong rather than the hotspot service itself.

Nevertheless, I did notice that this particular section of the Yes website said “Free Yes 5G Wifi Spot Across Malaysia”. While the section only listed F&B establishments surrounding Kwai Chang Hong for now, it already listed Kuala Lumpur, Selangor, Penang, and Perak which I assume are the initial focus areas for the service.