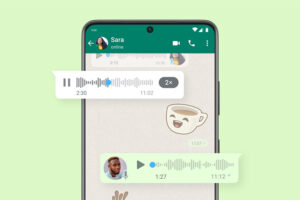 Meta has announced a new update for WhatsApp that is targeted at improving your experience with voice messaging on the app. The biggest new feature of note is the ability to pause a voice message and then resume recording, something that was seen being tested last year.

With pause/resume recording, you can make a rough draft of a voice message by pausing and previewing it before sending to a recipient. As the name implies, you can just resume your recording if you’re happy with what you hear, which is also helpful for long voice notes in case you need to pause for a breather.

Voice messages now also have waveform visualisation so you can see any long silences to skip. The voice notes will also remember where you left off if you pause and leave the chat and will even continue playing if you’re listening while chatting with other people.

WhatsApp also added the feature to have faster playback when listening to forwarded voice messages. The platform’s focus on voice notes isn’t surprising, as Meta revealed that users send an average of seven billion voice messages daily. However, the popularity of the bulkier audio files over text files could soon backfire on users, as there’s a possibility that WhatsApp backups could soon affect your Google Drive storage quota.