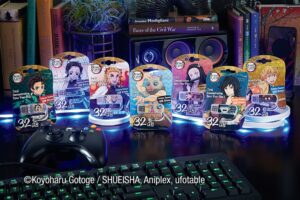 Digital storage brand Verbatim has over the weekend announced a number of USB drives featuring prints of characters from the Demon Slayer animated series. The company says that these are officially licensed, and are only available for a limited time.

This new Verbatim Demon Slayer USB drives consists of 12 drives, which can be broadly divided into two categories. One is dubbed the “Famous Phrases” series, which are 16GB USB 2.0 drives. There are five unique prints to choose from, featuring Tanjiro, Nezuko, Inosuke, Zenitsu and Rengoku. Each comes with a phrase that they have uttered in the course of the show, hence the name.

The second category of Verbatim Demon Slayer USB drives are called the “Famous Scenes” series. Despite the different name, the idea with these drives is more or less the same. It’s just that in addition to a phrase that they have said, the print tries to recreate the scene where the lines were said, rather than just a character portrait. The five characters mentioned above are available as options, but with Shinobu and Giyu as additional options. But more importantly, these are also 32GB USB 3.2 drives, so not only do they have a larger storage capacity, they are also faster when plugged into the appropriate ports.

As mentioned earlier, Verbatim announced the Verbatim Demon Slayer USB drives over the weekend. But if you want to buy a few for yourself, you can do so now. All 12 varieties of USB drives are now available on the brand’s official stores on Lazada as well as Shopee, and chances are you can pick them up on shelves from stores as well. The 16GB USB 2.0 drives are priced at RM39.90, while the 32GB USB 3.2 variants come with a RM69.90 price tag instead.