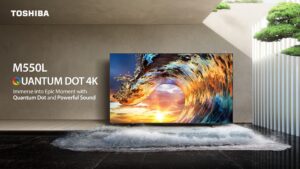 Toshiba has introduced its new M550L lineup of smart TVs for the local market. The series starts at very reasonable prices with a total of three sizes to choose from, all of which use Quantum Dot LCD panels with Google TV as their operating system.

The M550L has 4K resolution and is equipped with the EGZA Engine 4K Pro as well as full-array local dimming, though it is unclear how many dimming zones there are. The TVs support HDR10+ and Dolby Vision-Atmos, along with features for a better gaming experience such as an auto low latency mode, variable refresh rate, and Ultimate Motion which reduces blurring.

The Intelligent Auto View Pro feature found on this series uses light and colour sensors to automatically adjust the brightness and colour balance of the image based on the TV’s surrounding environment. Oddly enough, the company mentions that only the 55-inch and 65-inch models have a wide viewing angle, leaving out the base 50-inch TV. As for ports, Toshiba did not list the details in the spec sheet provided.

Audio-wise, the M550L lineup comes with a 25W “BAZOOKA Bass Booster” on the back, paired with dual 12W speakers which outputs up to 49W altogether. Toshiba also brought over its hands-free far-field voice technology, letting you control the TV with voice commands without needing to use a remote.

Aside from running on Google TV, the new Toshiba smart TV series is compatible with Apple AirPlay 2, thus letting you project music, videos, and photos from your Apple devices to it. There is also support for Apple’s HomeKit technology, which enables compatible devices to control the M550L remotely.

The Toshiba M550L lineup starts at RM2,599 for the 50-inch model, while the 55-inch and 65-inch variants cost RM3,199, and RM4,399 respectively. The new TVs can be found at authorised retail outlets as well as online, such as the brand’s official store on Shopee.