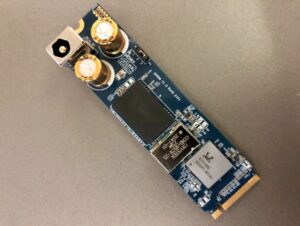 Audiophile-specific hardware is far from a new concept by any stretch of the imagination, but it goes without saying that there are opportunists that would try to part enthusiasts from their money. On that note, we give you something that just looks so unbelievable: an NVMe SSD that is designed specifically for audiophiles.

If you’re not quite sure what you’re looking at, don’t worry, that was our initial impression as well. The device was first posted on the Audiophilestyle forums, along with some rather farfetched specifications. Firstly, it’s got a 1TB storage capacity, which is expected for an SSD, but only has 333GB of usable storage, due to the component running in psuedo-SLC (pSLC) mode. But then the list for the rest of the components soldered on to it begins to sound rather farfetched.

This includes a Crystek CCHD-957 Femto clock oscillator, Audionote Kaisei 2x 220uf capacitors, an external 5V DC power input with capacitor pass through, a 2oz (56g) 8-layer PCB, and 5u gold plated connectors. Oh, and the SSD seems to have a Realtek SSD controller attached to it as well, which isn’t quite as surprising, considering that the brand first made its bones with sound processors, long before they decided to venture into the SSD controller market.

As compelling as all the fixture and fittings on these SSDs sound, there is but one, critical point: like all storage devices, SSDs are designed to store data in binaries of 0s and 1s. Ultimately, it is your PC and audio player that will decipher those 0s and 1s, sending it through the audio processing unit that is attached to the motherboard. Simply put, it seems unlikely that the Femto oscillator and those capacitors are there for anything more than to provide some modicum of legitimacy.

At the time of writing, the original poster of the device said that they were already sampling drives to a select number of forum members, but a majority of them lost contact with the maker, almost immediately after receiving the product. One sampler who did provide some insight, said that “initial impressions are positive” and that it is more pleasant to live with as his main boot drive, but we’re fairly certain that this was just sarcasm.

The post This “Audiophile Grade” SSD Looks Too Good To Be True appeared first on Lowyat.NET.