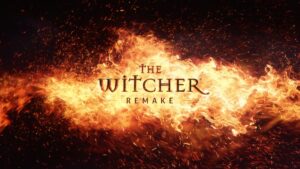 Last month, CD Projekt Red announced that it is remaking the original Witcher game. It will be built from the ground up using Unreal Engine 5. Now, more details about the remake has emerged, and one juicy tidbit states that the game will be an open world title. This will make it more in line with The Witcher 3: Wild Hunt, the most recent entry in the series.

In the company’s most recent quarterly report – or the slides for it at least – CDPR says that The Witcher remake will be an “open-world RPG”, and a modern reimagining of the original. Which sounds like something that goes without saying, but it’s important to remember that gaming norms back in 2007 were very different from what they are now.

Rather than an expansive world, the original Witcher has its map divided into regions, and each dungeon you enter was its own separate instance. Which is in stark contrast with The Witcher 3: Wild Hunt, where you can move from one to another seamlessly, unless you fast travel.

But beyond that one detail, The Witcher remake with Unreal Engine 5 remains as much a mystery as when it was first announced. Beyond the fact that Fool’s Theory will be developing the remake, basically nothing else is known about it. We’re not including its story beats, but even then, with a reimagining, it’s not impossible for minor elements of the game to get reshuffled to make the experience a fresh one for those who played the original. Even a massive shakeup to the established canon can work well, if the Final Fantasy VII Remake is any indication.

Release date is still unknown, which is also not surprising considering this project is still very new. It won’t be until a few more years before CDPR announces anything on this front.

The post The Witcher Remake To Be An Open World Reimagining appeared first on Lowyat.NET.