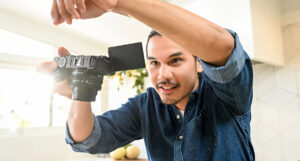 Nikon has recently unveiled the Z30, its latest camera designed for vloggers and content creators. Featuring an APS-C sensor, 4K 30fps video recording capability, as well as a lightweight and compact form factor, the new shooter is the brand’s answer to its rivals’ entry-level mirrorless camera offerings that are outside of the full-frame segment.

As mentioned earlier, the Z30 is by far the lightest and most compact mirrorless camera from Nikon – measuring at approximately 128 x 73.5 x 59.5 mm, and weighing at around 350 g for body only. In favour of a smaller form factor, the new shooter lacks an electronic viewfinder (EVF). Instead, users will have to rely on its fully-articulating 3-inch 1040 k-dot LCD touchscreen for framing their shots, which shouldn’t be a problem for vloggers. In addition, complementing its lightweight body is a deep handgrip that allows vloggers to comfortably operate it with just one hand.

Besides that, the camera also features Nikon’s Z-mount Nikkor lens support, Bluetooth and WiFi connectivity, a USB-C port for data transfer and charging, a Type-D HDMI connector, built-in stereo microphones, a 3.5mm jack, and a single UHS-I SD memory card slot. Meanwhile, powering the Z30 is a removable EN-EL25 lithium-ion battery. On that note, Nikon says the EH-7P charging AC adapter is not included together with the camera and has to be purchased separately.

The post The New Z30 Is Nikon’s Most Affordable APS-C Mirrorless Camera Yet appeared first on Lowyat.NET.