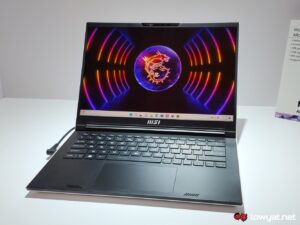 Most of you will know MSI’s Stealth Series laptops are primarily the “thin and light” models that still offer access to powerful mobile CPUs and GPUs. This year, during CES 2023, the Taiwan-based brand added two more models to the series, chief among them being the new Stealth 14.

As our title suggests, the Stealth 14 makes it clear that MSI intends on challenging ASUS and its rival’s own 14-inch offering and current darling of the 14-inch ecosphere, the ROG Zephyrus G14. To that end, the entire machine comes packaged in a very slim, sleek, and lightweight chassis, made up primarily of magnesium-aluminium alloy.

Still on the subject of its chassis, we cannot stress just how light and thin the Stealth 14 feels and looks. For that matter, the model that we saw on display was in what MSI describes as its “Pure White” colour scheme, but it should be noted that the laptop will also be available in a Star Blue colour tone.

Unfortunately, due to its 14-inch chassis, the Stealth 14 naturally is constricted when it comes to storage expansion and to that end, it also has a single M.2 NVMe Gen4 SSD slot. That being said, it still comes with a fair number of ports, including one Thunderbolt 4 USB-C port, a USB-C 3.2 Gen2 port with support for PD charging, and one USB-A 3.2 Gen2 port. Oh, and of course, it comes with support for Intel Killer AX Wi-Fi 6E and Bluetooth 5.3.

For another matter, you can see MSI’s vanity on the surface of the Stealth 14, with the most obvious located within the spine of the laptop. Honestly, it is pretty much the only space on the laptop where you’ll find RGB displayed prominently, along with the “Stealth” branding etched into its vents. For another matter, it’s clear that MSI is picking some design concepts from other brands, and in this instance, there is very clearly an inspiration taken almost verbatim, from Dell and Alienware’s laptop design.

At the time of writing, MSI did not specify pricing or local availability for the Stealth 14. But as we’ve mentioned in our earlier report of the Titan GT77, it is likely that the brand will announce those details either later this month or in early February, just before their imminent arrival later that month.

The post The MSI Stealth 14 Is A Direct Challenger To The ASUS ROG Zephyrus G14 appeared first on Lowyat.NET.