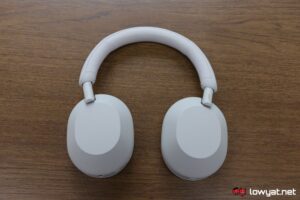 The Sony WH-1000XM5 is a lot of things. For the most obvious point, it’s the brand’s 5th generation ANC headphones but on the other hand, it also feels like Sony is trying to reinvent the wheel, through the powers of subtraction and addition.

The question then is: have these changes from Sony altered the listening experience on the 1000XM5, or does it manage to retain that same level of immersion as its predecessor?

The 1000XM5 is Sony’s latest ANC headphones to join the Japanese’s WH Series lineup. Unlike the previous four generations, however, the new headphones feature a new and even more minimalist design.

Available in both Black and Platinum Silver, the new look and design of the 1000XM5 feels as if Sony also wanted to add a touch of elegance to its ANC headphone lineup. In the case of the Platinum Silver model, the colour really makes it look and feel sleek and modern. For another matter, both the headband and memory foam on the earcups are really comfortable to the touch, and the former still retains that same durability and flexibility that the 1000XM4 had.

Moving on, 1000XM5 retains some of the original creature comforts on earcups. This includes the same number of buttons around the rear edges of the left earcup, while the side of the right earcup still houses the same touch-based, gesture controls that allow you to skip, repeat, pause, and play any and all songs on your playlist.

Even the audio prompts of the 1000XM5 have changed slightly, with the indicator for which mode you are in reduced to just chimes: a double ring means ANC is on, three means the ambient sound feature is active, and one short bassy ding means that both functions are off.

Given that my daily driver before this is the 1000XM4, there is a near identical sense of familiarity while navigating the 1000XM5. Again, all the fixtures and fittings are right where they are supposed to be, as is the navigation panel on the right earcup.

Moving on, the tautness of the 1000XM5’s headband isn’t as tight as before; by some engineering miracle, Sony has somehow managed to further reduce the tension on the earcups, yet still managing to make them snugly hold on to the side of my head. For another matter, Sony has also adopted a ladderless design, meaning that you get audible clicks whenever you extend or retract the length of the headband during adjustments.

One of the changes that Sony has made with the 1000XM5, which seems to have drawn a slight amount of ire from its fans is the size reduction of the carbon fibre drivers in each earcup. At 30mm, it’s 10mm smaller in diameter than its predecessor, but on the upside, the brand has made it more capable of delivering a tighter and more dynamic listening experience.

On the subject of performance, the 1000XM5’s strengths – again, much like its predecessors – clearly lie within delivering exceptionally clear highs and mids, while also demonstrating very accurate sound staging. In pieces like Yoko Kanno and the Seatbelts’ Digging My Potato, the harmonica that leads the track is always sharp with no signs of breaking, even with the volume set between the 70% and 80% range. In vocal-heavy pieces such as Jill Barber’s rendition of A Kiss To Build a Dream, the timbre in her voice sounds and feels on point.

The lows of the 1000XM5 are, unsurprisingly, not its strongest suit, but to be clear, this isn’t me saying that it’s hopelessly lacklustre. The pitch is still present and in songs like Nina Simone’s Feeling Good or Stacey Kent’s Venus de Melo, I am still able to distinguish the lows and deep lows, brought forward by the relevant bass instruments. But unlike other headphones and earbuds that I have tested in the past, it isn’t on a back-of-the-skull-rattling level that would literally make me shudder.

Then there is the 1000XM5’s ANC. Just as Sony has managed to improve its audio delivery, it has also managed to do the same with the headphone’s noise cancellation feature. I know I have already used this word in describing its audio delivery, but the noise cancellation function for this audio accessory is also tighter and seems to cut out more noise than the 1000MX4 does. That improved isolation does come with a small price, however, and that is the slight increase in Sound Pressure Level (SPL).

As for the voice calls and chatting, I am able to inform you that most individuals I have spoken to whilst using the 1000XM5 have indicated that I sound clear, with my voice not sounding intermittent or muffled. Oh, and that 30-hour battery life with ANC is legitimate; as my daily driver, I can use the headphones for several days (on and off) with the function active before actually having to charge it.

To its benefit, the majority of the 1000XM5’s flaws seem isolated to the physical design. To start things off, I believe we all saw this gripe coming from over the horizon: the 1000XM5’s foldability or lack thereof. Honestly, I don’t know what possessed Sony to make the decision to omit this feature from the ANC headphones, but lo and behold, that is the reality.

By removing the ability to fold up, the 1000XM5, as a result, can be a mild annoyance to pack into a backpack. To be more precise, the experience is made even worse by the headphone’s carrying case; while the interior of the casing looks and feels snug for it, it takes up more space than necessary, making closing the flap of my backpack that little more difficult. Honestly, even placing the casing on its side doesn’t alleviate the situation.

For that matter, some of the other standard fares is back on Sony’s dedicated Headphones app and more to the point, the ever-irritating Speak-to-Chat function. With the feature on, the act of clearing my throat or even just humming along to whatever tune I’m listening to automatically stops the music and kills the immersion and listening experience. Honestly, the feature is more of a hindrance and annoyance than it is a convenience, to the extent that I end up turning it off altogether.

Another accessory that Sony has removed from the 1000XM5 is the dual-prong 3.5mm headphone jack converter. While the removal of the accessory isn’t a huge loss to me personally, it is still undoubtedly a part of the WH Series’ “must have” accessories that fans have come to expect with each purchase of the past three generations of the headphones.

Oh, and also, while this particular caveat is intermittent in its appearance, there are times when the 1000XM5 would freeze, an action indicated by whatever media you are listening to at the time sounding like they’re having a spasm. Again, this is a rare occurrence and throughout my use, it’s only ever happened twice.

Considering what is currently available on the current market, I’m not going to lie: the Sony WH-1000XM5 is a bit of a hard sell.

Honestly, I think the biggest gripe I and, for that matter, other users may have about the 1000XM5 is the fact that Sony decided to do away with the foldability that endeared the WH series headphones to us. But if portability and a compact, foldable design are the make-or-break points in your decision-making process, then the 1000XM4 is still the undisputed champion of that realm. And it’s cheaper too, by a difference of RM200.

For that matter, the leap in performance between the 1000XM4 to the 1000XM5 isn’t that great, and if you already own the latter, I would recommend against spending RM1799, in order to stay current. However, if you’re trading up from older versions of the series, such as the XM2 or XM3, be it because the batteries can no longer hold a charge or they’ve outright stopped functioning. Then yes, getting the 1000XM5 as a replacement would definitely be a long-awaited upgrade.