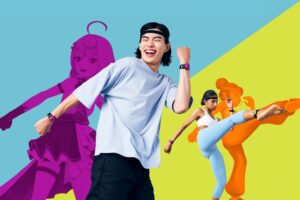 In today’s online world of YouTubers and live streamers, VTubers and VStreamers are starting to rise in prominence from what was once a ciche corner of the market. But having a virtual avatar instead of just revealing your real self has challenges of its own, primarily on the motion capture department. Sony has something that can be an affordable-ish solution, in the form of the Mocopi.

The Sony Mocopi is a motion capture kit that consists of six sensors, each about the size of, say, an Apple AirTag. Each measures 32mm across in diameter, and weights about 8g, and are labelled for which part of your body they are supposed to be strapped to – one for your head, one for your hip, one for each wrist and one for each ankle. They are also dust-proof and water resistant, with the usual IP65 / IP68 rating that you find on most of the brand’s smartphones. While we’re on the subject, the sensors also connect to phones via Bluetooth.

On the software side of things, the Sony Mocopi uses the company’s proprietary algorithm to translate physical motion into data. This can then be streamed to applicable software like VRChat. Or, should you prefer, you can also export your motion with an avatar as an MP4 video file. Being completely wireless, the Sony Mocopi set comes with a carrying case which also serves to charge the sensors. The company claims that each sensor has a battery life of up to 10 hours, and the case can charge each one up to full in 1.5 hours, or 90 minutes, via USB-C.

This is all pretty impressive-sounding, but there are a couple of issues that one can foresee some very specific use case issues with the Sony Mocopi. For one, there’s no indication on if it does finger tracking. The how-to video posted on YouTube indicated that there’s lip-syncing at least, but its accuracy remains to be judged.

Sony announced that it will be releasing the software development kit (SDK) for the Mocopi on 15 December, so that devs can get it to work on things like Unity and Autodesk MotionBuilder. A little later, consumers (in Japan at least) will be able to purchase it for JPY49500 (`~RM1600) in late January. No word on when or if it will be available elsewhere just yet.

The post Sony Mocopi Can Be Your Very Own Motion Capture Kit appeared first on Lowyat.NET.