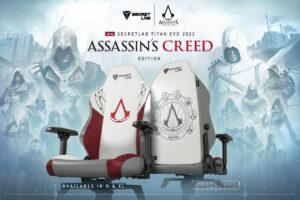 Secretlab, the Singapore-based brand that rose to fame with its premium, high-end, gaming chair and desks, recently announced its latest collaboration with Ubisoft and launch of its new Assassin’s Creed (AC) themed gaming furniture, as well as to celebrate the franchise’s 15th anniversary. And boy, do they look sleek.

To be clear, the new AC-themed motif extends to both its TITAN Evo 2022 gaming chairs, as well as its current Magnus gaming desk. Officially, Secretlab says that its inspiration for the new red, white, and grey motif stems from the Animus found throughout the AC series, but based on what we’re seeing, it’s clear that the gaming furniture maker drew inspiration from the Italian Renaissance of the Assassin’s Creed 2 franchise; what is considered by fans to be one of the best AC titles in the series.

Starting with the TITAN Evo 2022, Secretlab has blended the three colours, unique to the Assassin’s traditional garments, into a beautiful and intricate design, weaved into the chair’s NEO Hybrid Leatherette material. On the front, its side wings show off futuristic embroidery, paying tribute to the design of the Animus 2.0, while the red lattices, pure white backrest and the bold, crimson red Assassin’s emblem pay homage to the attire worn by the Italian Assassin, Ezio Auditore de Firenze.

Around the back of the TITAN Evo 2022, Secretlab has woven a large Assassin’s emblem into it. That, in turn, is encircled by the Assassin emblem of each major AC titles released in the past 15 years, along with the words “We Are Assassins – We Work In The Dark To Serve The Light.”.

As for Secretlab’s Magnus gaming desk, fans will also be able to customise their desk to the AC theme through the brand’s MAGPAD Desk Mat Assassin’s Creed Edition, which sports the outline of the Assassin’s emblem, complete with bright Crimson Red accents. Not only that, but the fans can also purchase a special Assassin’s Creed Edition Magnus Cable Management bundle, allowing fans to further complement the theme and keep their cables organised in style.

You can check out the details of the series on Secretlab’s official page.