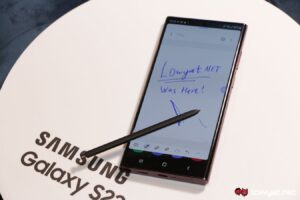 Samsung is reportedly considering the possibility of having MediaTek’s Dimensity as a chipset option for its next batch of premium Galaxy smartphones. And yes, that means that the Korean electronic giant could install the Taiwan-made chips into its Galaxy S series lineup.

It isn’t unusual for MediaTek SoCs to be used in Samsung Galaxy devices. As it stands, the Korean tech brand has shipped out several of its mid-range Galaxy A series devices, fitted with MediaTek SoCs, while its more premium lineup, the Galaxy S series, often ships out with its own homemade Exynos SoC or the latest Qualcomm Snapdragon flagship SoCs.

According to a report by BusinessKorea, the Korean brand is exploring the idea of shipping out half of its Galaxy S22 FE units with MediaTek silicon, as well as the next-generation of Galaxy S23 devices, when they launch later next year.

Samsung’s pondering and perhaps, future decision to ship out phones using MediaTek silicon isn’t actually a terrible idea, despite its history of being less than forthcoming about the performance of its products in the past. As it stands, the company’s latest Dimensity 9000 SoC has shown performance metrics that are almost on par with Qualcomm’s current Snapdragon 8 Gen1 chipset. On top of that, it currently powers certain flagship devices, such as the Oppo Find X5 Pro.