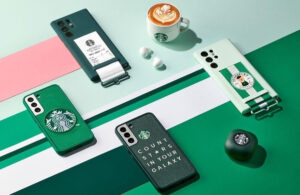 Samsung Korea today has announced a new collaboration with coffee company Starbucks via the latter’s official Facebook page. Unveiled are several limited edition accessories sporting the latter’s branding which are made exclusively for all three Samsung Galaxy S22 models, as well as for the Galaxy Buds2 TWS earbuds. All of which, the tech giant says, are made from eco-friendly materials.

The Galaxy x Starbucks collaboration includes four limited edition phone covers and two case covers for the earbuds. The standard Samsung Galaxy S22 gets a simple dark green cover which features a small Starbucks logo and a tagline that reads “Count Stars In Your Galaxy,” whereas the Plus variant gets a lighter green barista apron-inspired design with a large embroidery of the coffee company’s logo at its centre.

The Galaxy S22 Ultra, on the other hand, gets two different covers with integrated straps. The first features a light pastel green colour and a striped strap with a Starbucks logo featuring its Bearista mascot, while the second comes in a dark green colour scheme and a strap that is cleverly based on the company’s receipt.

Then there’s the two case covers for the Samsung Galaxy Buds2, where one is basically a dark green coloured cover featuring the coffee company’s logo on top. The second of which is much more unique, as it’s shaped as the familiar white Starbucks coffee cup – complete with latte art on top. Samsung adds that both covers are also compatible with Galaxy Buds Live and Galaxy Buds Pro cases.

As you may have expected, all of the accessories from this collaboration are exclusive to South Korea, and are unlikely to see a release in other regions. Samsung Korea notes that the Galaxy x Starbucks collection will launch tomorrow on 28 June 2022, but did not specify the pricing for each item.