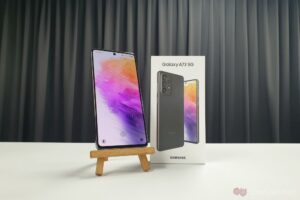 Last year, Samsung released its Galaxy A72 with a price tag of RM1899. This year, the company announced the Samsung Galaxy A73. And with a new price tag of RM2099, the scales have finally tipped away from the mid-range…well, range for smartphone prices locally.

But despite what the price would suggest, the Samsung Galaxy A73 is equipped with components that fall squarely within its original mid-range bracket. As you’d expect, a yearly refresh usually means the familiar annual incremental upgrades. But what exactly are they? Let’s find out.

The most major update over the previous model is the quad-camera combo at the back, though arguably with a trade-off. The chipset and refresh rate upgrades are appreciated, but likely only something you’d notice when gaming, or when switching between a few resource-heavy apps. More on that later.

On the design front, it’s probably fair to say that the Samsung Galaxy A73 has changed very little from the preceding A72. In fact, colours aside, there’s only one major, obvious difference between the two. And that difference is, very unfortunately, the 3.5mm audio jack.

Beyond that though, almost everything is exactly where it was before. This ranges from the nice but slippery, frosted glass-esque plastic back, the seamless camera bump, to power button and volume rocker on the right, as well as the USB-C port and speaker grille at the bottom. The SIM tray has been moved to the top from the left, which is a minor difference compared to the lack of the 3.5mm jack.

The screen is also familiar, at least on the surface. It measures 6.7 inches as it did before, with the Full HD+ resolution and the same punch-hole camera cutout in the middle. Though there’s one noticeable improvement here, and that’s the slightly thinner side bezels. Less noticeable is the bump up in refresh rate, which has gone from 90Hz to 120Hz, which we’ll get to in a bit.

It’s probably worth mentioning at this point that the Samsung Galaxy A73 does not come with a wall charger in the box. Though it does come with a charging cable. It’s also worth mentioning that it’s a USB-C to USB-C cable, which is definitely something to keep in mind if you’re thinking of making use of a leftover charger.

While the Samsung Galaxy A72 felt pretty hefty for what it was, the Galaxy A73 felt considerably lighter. Its actual weight does reflect the difference, with the newer phone being about 22g lighter, but it feels considerably easier on the hand and wrist. This is especially the case when holding the phone in landscape mode.

As before, while the phone has a dedicated speaker grille at the bottom, the earpiece up top also doubles as a second speaker for a pseudo-stereo experience. The sounds that they produce sound fine, but they are quite limited in their maximum volume. In a way, it prevents them from being distorted, and that can be construed as a good thing, I guess.

In its everyday use case, the Samsung Galaxy A73 performs fine. There are the usual hiccups you’d expect from a midrange chipset, and the Qualcomm Snapdragon 778G chipset in this phone is no exception. These include the occasional stutter when switching between resource-heavy apps, such as video streaming apps and games. The synthetic benchmarks also show the kinds of scores you’d expect, though it’s worth mentioning that the Sling Shot benchmark on 3DMark refuses to run on this phone.

I mentioned the maximum refresh rate on the A73 had been bumped up to 120Hz earlier. This has completely replaced the previous 90Hz option, so you’re stuck between the two extremes of 60Hz and 120Hz. The jump in smoothness between the two is obvious enough that you’d want to stay in the latter as often as possible.

I know what you’re next question to this point is, and the good news is, doing so doesn’t come as too great a detriment to the battery life of the A73. Going through a day with similar use patterns, the phone has approximately 10% less battery charge at the end of the day with the 120Hz refresh rate than you would with the 60Hz refresh rate. But even with extremely frugal use – even with the refresh rate toned down to 60Hz – it’s unlikely that you’ll be able to stretch it to more than a day.

The Samsung Galaxy A73 comes with a quad-camera setup at the back. These consist of the main 108MP unit, the 12MP wide-angle shooter, and a pair of 5MP sensors, one for macro shots and the other being the depth sensor.

Things are a little better here on the software side of things. There’s still a slight delay when you switch between the main and wide-angle cameras, but at least the white balance is maintained throughout the process.

Speaking of which, the white balance here, when left in auto, goes back to trying to fight ambient lighting. Colours are also a lot more accurate than before, which is a definite plus. Detail retention is okay, but you’ll notice the AI working to sharpen things up. Low light situations are a struggle, but that’s to be expected.

The Samsung Galaxy A73 faces competition from quite a few alternative phones, what with its RM2099 price. Here are a few of them.

The OPPO Reno7 comes with a price tag of RM1999, slightly undercutting the subject of this review. But for its price, it comes with a MediaTek Dimensity 900 chipset, a 6.4-inch Hull HD+ 90Hz display, a 4500mAh battery, 8GB of RAM and 128GB of storage space.

For its cameras, it has a 64MP main unit, an 8MP wide-angle shooter and a 2MP macro camera at the back. In front, it has a 32MP camera sitting in a punch-hole cutout on the left corner.

The Vivo T1 is among the few phones sporting the Qualcomm Snapdragon 778G chipset that has already arrived on our shores at the publication of this review. But the difference in price here is pretty significant, with the T1 having a price tag of just RM1299.

For what it asks for, the phone provides the aforementioned Snapdragon 778G chipset, a 6.44-inch Full HD+ 90Hz display, 8GB of RAM, 128GB of storage space and a 4700mAh battery. At the back, it has a 64MP primary shooter, an 8MP wide-angle unit and a 2MP macro sensor. Then there’s the 16MP front-facing camera in a waterdrop notch.

And finally, we have this phone’s own predecessor, the Samsung Galaxy A72. Usually, an annual refresh would mean that there’s really no reason to pick the older model over the newer. But if you’re someone who’s looking for a phone with a 3.5mm audio jack, then this is something to take into consideration.

The Galaxy A72 launched with a price tag of RM1899 and has a Qualcomm Snapdragon 720G chipset, a 6.7-inch Full HD+ 90Hz display, 8GB of RAM, 256GB of storage space, and a 5000mAh battery. Its primary camera setup consists of a 64MP main shooter, an 8MP telephoto lens, a 12MP wide angle camera and a 5MP macro sensor.

The Samsung Galaxy A73 comes with mostly all the sort of incremental upgrades that you’d expect from an annual refresh. Its available colours are more discreet, but otherwise it looks pretty much the same as its preceding model did. Which is great for those who loved the look of the A72, but not quite so for those who didn’t.

While it’s overall a good mid-range device, the fact that it breaks past the RM2000 barrier may be a hard pill to swallow for some. Ditto the lack of a 3.5mm audio jack, especially if it is something you still actively use. But if these are things that don’t bother you, then the Samsung Galaxy A73 is a good midrange device to pick up if you’re just looking for your once-in-a-few-year upgrade.