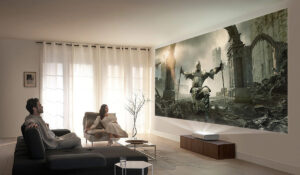 Nothing beats watching the latest blockbuster in the cinema for the very first time. The large display and incredible surround sound enables for an incredible immersive experience that pulls you into the movie itself.

But what if I told you that you can actually relive this moment at home with just one device?

Introducing The Premiere LSP9T Smart 4K UHD Ultra-Short Throw Triple Laser projector by Samsung. If some parts of its name has not given away its features yet, you’ll be delighted to know it is a projector that is capable of displaying ultra-massive, cinema-worthy images in high resolution at a short distance. Meaning that you can simply position it with minimal distance in order for it to project your favourite movies, shows and more!

Gone are the days where projectors feature large, bulky and almost industrial-like designs. Samsung’s The Premiere projector is designed to seamlessly blend in with your living or entertainment space; sporting a compact form factor with beautiful curves and minimalist details!

Further complementing the projector’s neat and elegant design is its easy connectivity, which enables for tidier cable management that reduces any unnecessary clutter. And thanks to its short-throw projection capability, it does not require any type of mount and can be placed on a TV cabinet against a white wall in your living room!

Don’t let its small size and short distance projection fool you. Samsung’s The Premiere is able to project images of up to a whopping 130-inches on a wall, which is incredibly larger than most common TVs in the market!

Thanks to its built-in Triple Laser Technology, the projector is HDR10+ certified and is capable of displaying lossless 4K resolution image quality with vibrant, accurate colours and contrast. This enables it to be on par with its cinema-based counterparts, allowing you to watch your favourite blockbusters in a movie theater-like experience at the comfort of your own home!

Speaking of which, The Premiere is also the first ever home projector to feature the all-new Filmmaker Mode which provides a true cinematic experience by eliminating any artificial enhancements when screening a film. This allows viewers to watch a movie in its purest form – presented in the way the director intended the audience to experience it!

Furthermore, forget about having to pull down the blinds or closing the curtains as The Premiere projects at an impressive 2800 ANSI lumens of brightness. This enables you to enjoy high quality images regardless of lighting conditions – even in broad daylight!

The Premiere also offers more than 20,000 hours of brilliant luminescence for your viewing experience. This means it has 10 times the lifespan of a regular UHP projector lamp, which allows you to enjoy over 10,000 movies!

As mentioned earlier, The Premiere also comes with built-in speakers and woofer. Again, despite its compact size, the projector’s audio system is capable of delivering powerful, high quality sound with incredible bass via its 40 watts 4.2-inch speakers. It also features adaptive audio which utilises Samsung’s Acoustic Beam technology to deliver an unparalleled immersive and rich surround sound throughout your entire living room!

The Premiere is not just a projector, it can also be used as a Samsung Tizen-powered Smart TV! Onboard are a variety of OTT (Over The Top) Services ready at your disposal, which allows you to enjoy popular streaming services such as Netflix, Amazon Prime Video, YouTube and more!

And that’s not all! Also not forgetting the ability to control the projector via Samsung’s own Bixby voice assistant, as well as enabling you to mirror your smartphone’s display (iOS and Android) on-screen via a companion app, Apple AirPlay 2. Also not forgetting Tap View which lets you seamlessly cast your phone’s screen by simply tapping it on the projector!

Samsung’s latest projector is not limited to just viewing movies or TV shows, as you are able to take your gaming experience to a jaw-dropping cinematic level as well! With The Premiere’s onboard Game Enhancer mode, image output is automatically adjusted to eliminate any delays thus allowing you to seamlessly react in time and score even more points during gaming sessions!

Experience The Premiere at home.

The Premiere proves that movie enthusiasts wouldn’t need to renovate their homes to create the ultimate cinema experience at home. Albeit being a device that is no larger than a desktop printer, this latest projector by Samsung is more than capable of delivering outstanding image quality and sound, as well as other convenient smart features in a compact yet aesthetically pleasing package.

This article is brought to you by Samsung.

The post Relive Your Best Cinema Experiences With The Premiere Smart 4K Projector By Samsung appeared first on Lowyat.NET.