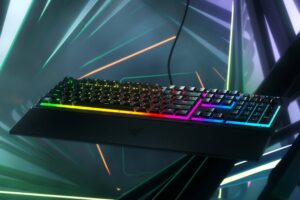 Razer first introduced its Ornata mecha-membrane keyboard back in 2016, with a V2 refresh in 2020. The company has deemed the series fit for a refresh this year, as it recently announced the Razer Ornata V3.

So what’s new with the new generation keyboard? According to Razer, the Ornata V3 has a smaller footprint. While it’s not immediately apparent, you can see that the space between the numpad and cursor control keys, as well as between them and the alphanumeric segment, is indeed ever so slightly smaller. The company also says that the new keybaord has slimmer keycaps and shorter switches for less strain when used for extended periods of time.

One other notable difference between the Razer Ornata V3 and the V2 is found on the top right corner. The three media control buttons and a scroll wheel is now just a set of four buttons. Beyond that, the cables are now braided, but you still get cable routing options underneath. The magnetically attacked wrist rest is also present, as is the 10-zone Chroma RGB lighting.

Alongside the Ornata V3, Razer also announced the Ornata V3 X. As indicated by the X designation, this is a more budget friendly version of the keyboard. And with that, come some major concessions. Chief among them being the purely membrane keys rather than mecha-membrane. RGB lighting is also reduced from 10 zones down to one.

As for their prices, the Razer Ornata V3 is the most affordable the series has ever been, with a price tag of RM329. For reference, the V2 was released with a price of RM499, while the very first was priced at RM379.90. As for the X model, you can get this for RM195, which is a lower launch price than the two generations of Cynosa membrane keyboards. For context, both were launched at RM299.

If you’re interested in any of the new Ornata entries, you can find them from the official Razer store linked below. Though at the time of writing, the X model is listed as out of stock.