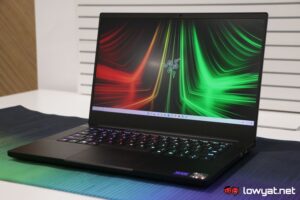 Razer’s Blade 14 lineup, like every other Blade laptop, practically follows the same mantra, year after year: keep it simple, maintain a clean design, make them powerful and practical, but above all else, keep them wrapped in that gorgeous black, CNC milled chassis that it is famously known for.

The Razer Blade 14 Ryzen 2022, then, is one such machine that adheres to that ideology but more to the point, it’s a follow-up to what we consider to be one of the best laptops of 2021.

When it comes to Razer and its laptops, there’s usually little to discuss on the matter. Much like Apple, the company rarely deviates from its signature design, and even then, it’s only ever to accommodate modern hardware and its pre-conceived designs. They are, in the purest of terms, the dictionary definition of the phrase “If it ain’t broke, don’t fix it”.

“If it ain’t broke, don’t fix it” philosophy is proven strong with the new Blade 14.

As for what Razer actually did change on the new Blade 14 Ryzen 2022, I can tell you that they are, at best, minimal and improve on to the aesthetics as a whole. For starters, the speaker grilles on each side of the laptop’s base aren’t separate from the chassis’ construction. Instead, Razer has drilled them directly into it, thus giving it a more solid look.

Beyond that, the Blade 14 Ryzen 2022 maintains the status quo on the rest of the hardware. That means the same number of USB-C and USB-A ports distributed evenly on both sides, the same responsive trackpad and Chroma-enabled keyboard, and the same 165Hz QHD IPS display.

Even the battery and the overall weight of the Blade 14 Ryzen 2022 are the same; it’s amazing to think that the battery’s size still just a little over 60WHr in size, yet by some sorcery, it’s still able to impress. But more on that later.

As mentioned, the weight of the Blade 14 Ryzen 2022 and its dispersion is the same at less than 2kg, yet for some unearthly reason, it actually feels hauntingly heavier than its predecessor. I know it sounds like I’m exaggerating, but it really does feel like that.

The only difference between this Blade 14 Ryzen 2022 and the previous version are the main components; the unit I’m currently reviewing is fitted with the new AMD Ryzen 9 6900HX CPU, along with a more powerful NVIDIA GeForce RTX 3070 Ti with a 100W TDP, and 16GB of the latest DDR5 RAM for laptops, with a maximum operating frequency of 4800MHz.

Of course, being a laptop with an all-black chassis, one of the prevailing issues that I have with the Blade 14 Ryzen 2022 is its propensity to being a fingerprint magnet. It’s a small price to pay with but honestly, unless I’m trying to impress people with its sleek good looks – I promise you, I don’t – or if I’m taking pictures of the machine, I’m actually not phased by the smudges my finger leaves behind.

When I reviewed the first Blade 14 Ryzen, the experience with it as my daily driver was nothing short of sublime, both as a gaming and productivity workhorse. With the Blade 14 Ryzen 2022, I can confidently and safely tell you that it is very nearly a repeat performance, and that’s saying something.

I’ll start once again by first addressing the one component that I don’t necessarily find appealing: the keyboard. Then, as now, the Blade 14 Ryzen 2022 uses Razer’s own N-key rollover switches. It’s a very familiar feeling, with the short key travel that is accompanied with a curt and sharp actuation, waiting for my fingers at the bottom of each key well.

To be clear, I said I don’t find it as appealing as other keyboard, but it is far from an unpleasant experience; my fingers do not feel fatigued even after prolong hours of typing or gaming. For extra credit, I like the fact that the keys feel “clicky”, with just a smidgen of linearity added to the mix.

And although I have griped about the keyboard being smooshed into a 14-inch form factor, usage of the previous model over a period has gotten me accustomed to it. That said, I still think Razer could have done a better job with the placement and design of the arrow keys at the bottom right.

Then there’s the 14-inch display of the Blade 14 Ryzen 2022. Like the keyboard, even through long hours, it barely strains my eyes; words are sentences are clear and sharp, and the contrast ratio are accurate, overall, and that’s a good thing when I’m watching some video content or looking at pictures. Basically, they don’t look washed or blown out, or even too saturated.

Fans are silent through the day, but get violent when needed.

One of the finer, yet equally important aspects of the Blade 14 Ryzen 2022 is just how subtle its fans really are. By default, they barely make a whisper when I’m handling basic tasks like sending out an email, watching videos online, or even chatting with a couple of friends, be it over Discord or one of the multiple messaging apps I’m on.

When I kick it up a notch and switch to gaming, that’s when the beast within the Blade 14 Ryzen 2022 decides to come out, but how it does that actually depends on the ambient temperature of the area I’m in. If I’m gaming on it at the office where I keep the room at a cozy 20°C, the fans seem to ramp up in speed moderately higher, but not enough to sound like that plane prepping to take off. That last bit, by the way, occurs whenever I’m in an area where the temperature is, on average, 25°C or higher.

That brings us nicely into the domain and hunting grounds of the Blade 14 Ryzen 2022: gaming. Equipped with AMD’s top-of-the-line Ryzen 9 6900HX mobile CPU and a more powerful NVIDIA GeForce RTX 3070 Ti discrete GPU, the laptop absolutely blitzes through all of the titles that are thrown at it, and at its native resolution of 2560 x 1440 and with all of their graphical presets cranked all the way to their highest settings.

It goes without saying, naturally, that gaming on a laptop can and will generate a lot of heat, and sadly, the Blade 14 Ryzen 2022 is no exception to the rule. At its peak, the 6900HX averages between 97°C and 100°C, with one instance of it breaking through the latter and sustaining itself at 104°C. At that temperature, coupled with the laptop’s thin and light chassis, thermal throttling does occur and it shows in the gaming experience. For example, in Cyberpunk 2077, the game usually runs at an average of 42 fps, but when temperatures get too hot, that number can drop down to just above the 30 fps average. That, and you begin to see micro-stutterings in-game

Last but not least is the battery life and let me tell you that it is still just as noteworthy as its predecessor, and that is also thanks to Razer’s Battery care technology. On average, and with Chroma RGB turned off and the screen brightness kept at 60%, the Blade 14 Ryzen 2022 gives close to 11 hours, right before it starts telling you that it needs to be fed.

One other caveat to the Blade 14 Ryzen 2022? It’s not the cheapest gaming laptop on the current market, and this SKU goes for RM12599.

But for those among you looking for alternative gaming laptops in the 14-inch category, you’re pretty much stuck with one choice, and it’s actually from team ASUS.

That’s right. Just as before, ASUS’ latest version of the ROG Zephyrus G14 is currently the only other 14-inch gaming laptop that could go toe-to-toe with the Blade 14 Ryzen 2022. Well, I say could, but that’s only because the hardware it currently uses isn’t technically identical.

For starters, the laptop is an AMD Advantage Edition laptop and to that end, it’s got a Ryzen 7 6800HS, although the original model was meant to ship out with a Ryzen 9 6900HS. Moving on, the discrete GPU in the top-tier SKU uses a Radeon RX 6800S, and there’s double the amount of DDR5 RAM at 32GB. Additionally, it also comes with a 1TB NVMe Gen4 SSD installed.

Other specifications of the laptop include the 14-inch display that uses a 16:10 aspect ratio, a maximum resolution of 2560 x 1600, which also comes with a static refresh rate of 120Hz. Then there’s the larger 76WHr battery that powers up the entire machine. Oh, and there’s the Anime Matrix LED panel built into the back of the display as well.

The Razer Blade 14 Ryzen 2022 is, beyond a shadow of a doubt, an absolute beast. Whether I am using it to join in on the fun of gaming with a few of my buddies while I’m out of town, or when I need to churn out a couple of articles to post while I’m out of town, believe me when I say: it does not disappoint.

The Blade 14 Ryzen 2022 is a repeat performance from last year’s model, and then some.

The one potential deal breaker that I see for the Blade 14 Ryzen 2022 and more specifically, for this SKU, is its asking price. At RM12599, it’s a damn sight pricier than its predecessor, let alone the new Zephyrus G14. However, one could argue that Razer always puts a premium on its products and for that matter, their products rarely disappoint. Well, most of them anyway.

If you’re coming up from the previous generation Blade 14 Ryzen, I recommend that you stick with that machine; even with the graphical gains you get from the RTX 3070 Ti, you’re still holding an equally high-octane beast of a laptop, so there’s really no benefit in you trading up to this one. To that end, for those of you looking to trade up from that four to five-year-old laptop and adopt the new PCIe 4.0 standard – and willing to spend five figures on a gaming laptop – have at it.