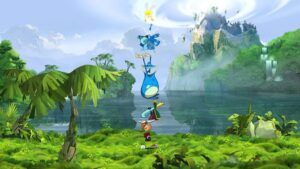 Ubisoft is currently giving games away for free as part of its 35th anniversary celebrations. The publisher previously gave away the Assassin’s Creed Chronicles Trilogy and Splinter Cell: Chaos Theory. Now it’s the turn of Rayman Origins.

For the unfamiliar, Rayman Origins is a 2D platformer that was released all the way back in 2011. It allows for up to four players to drop in and out of co-op play at any time. Players take control of either Rayman himself, Globox, or up to two Teensies for their couch co-op sessions.

Discover the magical world of Rayman Origins for free at the Ubisoft Store!

Rayman Origins is the second last entry in the series, with the sequel Rayman Legends being released in 2013. And with no new entries being announced, going back to the classics may be the only choice for fans of the series. Which is all the more reason to grab it while it’s free.

The post Rayman Origins Is Free On PC Until 22 December appeared first on Lowyat.NET.