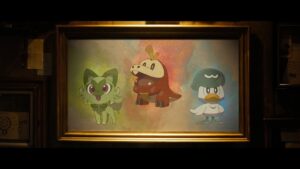 It’s probably fair to say at this point that Pokemon Scarlet and Violet is far from the best game out there from a technical standpoint. In fact – for all the failings, perceived or real – from the video game series, no game prior has gotten the backlash that the current game pair has received. Fans are brought into the ninth generation of the franchise on a bad foot – like stepping on a banana peel instead of a welcome mat.

This is in quite stark contrast with the game that was released earlier this year, Pokemon Legends: Arceus. While it had its own technical issues, they were extremely minor in comparison, while the entire package would come to be known by some as the greatest entry in the entire franchise to date. Its initial announcement early last year came as a surprise to many but in comparison, few questioned its release date, which is early in the same year as The Pokemon Company is expected to launch the franchise into a new generation.

In hindsight, it’s probably a good thing that this year of 2022 started strong for the franchise. As someone who had gotten tired with the franchise since it introduced Ultra Beasts in Sun and Moon, Pokemon Legends: Arceus got me excited for the series again. It got me wanting to see more when the box legendaries of Pokemon Scarlet and Violet (especially Violet) were revealed. I was invested once again, and the poor technical state of the new games got me more disappointed than the announcement that, starting with Sword and Shield, a complete National Dex will no longer be a thing.

The technical state of Pokemon Scarlet and Violet also makes me glad that Legends: Arceus was released this year. It serves as a fallback for those who were looking forward to the new generation, at least until the latest games are in a better technical state. In many ways, it’s also the better game; considering its fluidity, which is only partially brought to the new generation.

As for when the new games will be in a better state, it’s really difficult to say. It’s likely that Game Freak is pulling out all the stops to make it happen considering the negative press that it is getting. But the time that the developer spends fixing the game may be time taken out of the development for the next generation of games.

As Nintendo Life reported back in August, development of Pokemon Scarlet and Violet started in late 2019, around the time Sword and Shield were gearing up for their own launch. This means, now that Scarlet and Violet are out, chances are that production of the 10th generation of games are already underway. And indeed, with the exception of the transition between generations three and four, every other generation has lasted for three years before the next one gets released.

On a related note, work on Legends: Arceus started in the autumn of 2018, a year before Sword and Shield launched. This gave it at least a couple more months to be worked on than Scarlet and Violet. A couple of months that, arguably, the latter needed more than the former.

GamesIndistry.biz argues that perhaps The Pokemon Company should drop the three-year cycle between generations, and on the game development side of things (and for Game Freak’s sake), I would agree. Pokemon Scarlet and Violet clearly needed more time in game dev oven, and a delay by even a year would likely allow both games to be the best they can be. But that’s difficult, if not outright impossible, simply because Pokemon is more than just its games.

The most profitable franchise in the world is a very well-oiled machine, with many moving parts. These include, but are not limited to, the TV animated series, the movies that go along with them plot-wise, the trading card game, other physical merch, and whatever tie-ins with other brands the franchise may have. Just delaying the games, especially the generation-defining ones that release in pairs like Scarlet and Violet, would put throw a serious wrench into the works.

For better or worse, Game Freak, being one of the three parts that make up The Pokemon Company, may have basically locked itself in a vicious cycle that makes no allowances for mistakes. And each one that happens will mean either setting the entire franchise back timeline-wise, or more work for its devs within a strict and inflexible schedule. It’s a wonder that Pokemon Legends: Arceus even exists, nut I am very glad that it does.

All that being said, the franchise has, even if only once, deviated from the three-year schedule. Pokemon Diamond and Pearl, the fourth generation of the series, came out in 2006, or four years after the third generation Ruby and Sapphire in 2002. Rather than being an anomaly, the company should probably consider a few four-year cycles in between the norm of three. Not only would that give Game Freak more time to flesh out ideas properly, it would also give the other parts of The Pokemon Company money printing machine more time to come up with more monetisable ideas.

Though, should that actually happen, I would probably feel bad for the team in charge of the animated series. Having to not only plan a story, but also animate and voice it for 52 additional episodes sounds like a veritable nightmare in its own right. And when taking the complete picture into account, who knows? Maybe The Pokemon Company saw it fit to collectively throw Game Freak under the proverbial bus, rather than sink the additional amount of resources needed to fund 52 extra episodes of the animated series.

And on that bombshell…