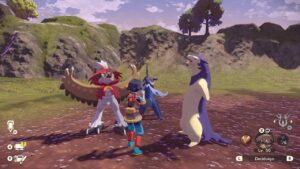 Once upon a time, I would’ve considered myself a hardcore Pokemon fan. My history with the franchise is long, chronologically at least, but not very storied for a variety of reasons. Generation VII was the tipping point for me, after which I had to admit with a heavy heart that I’m no longer a fan of the series. But just as the curtains were falling at the end of Generation VIII and with Generation IX standing by to take the stage, Pokemon Legends: Arceus was released.

Sure, within the same year there have been many better games in any variety of qualities. This naturally includes Elden Ring and God of War Ragnarok, winner and runner-up for Game of the Year at The Game Awards 2022, respectively. But Pokemon Legends: Arceus is my personal Game of the Year for the way it remixed the the 26-year old formula, as well as they way it rekindled my love for the series.

As other jaded fans (former and current) can attest, Pokemon at its core has not changed much up until Legends: Arceus came about. Each generation of the games, from the first all the way up to the eighth, play similarly. Sure, you have a new region each generation, as well as new pocket monsters and moves to go with them. But beyond that, the core mechanics of the game have pretty much remained unchanged. Even the new story of each is a rehash of the same formula that sees you completing the Pokedex, challenging eight gyms and the Elite Four, and thwarting the plans of the generation’s criminal organisation.

That’s not to say that Legends: Arceus does not have variations of these elements as well. But they are varied enough that, for once, they feel fresh enough that you don’t immediately see the connection.

Going in the same order, completing the Pokedex is now a much more important part of the story than ever before, where in the old established formula it is more relegated to post-game content. Completing it also feels more like field research rather than just catching a member of each Pokemon species, with the much faster and smoother gameplay accommodating this change.

Gym leaders in Pokemon Legends: Arceus are now Noble Pokemon, which you defeat via a rudimentary bullet hell game, with standard battles thrown in on occasion. There’s no Elite Four or criminal organisation per se. But depending on the way you look at things, the two are kind of intertwined, with the Creation Trio playing these roles.

All that being said, none of these changes are as groundbreaking as the sheer smoothness of the game, as I mentioned earlier. Pokemon Legends: Arceus is so streamlined that, most of the jank that we take for granted as being a part of the series have been ironed out. The short version is that parts of the game that required you to mash the A button have been removed to not only preserve the long term health of said button, but also save you a ton of time.

Caught a new Pokemon or just finished a battle? Your team’s EXP gains are displayed as a popup notification on the top left for a few seconds as you continue playing the game, instead of having a few more dialogue boxes that you need to mash A out of.

A team member learned a new move? Change it at any time from the menu. Which is much better than having to mash A through inane dialogue boxes and then decide if you want to keep or discard the new move, and mash A again. Also, in most games, moves not learned or forgotten are gone forever unless you go to a Move Reminder NPC. Not in Pokemon Legends: Arceus – you can change up your teams moves at any time, and revert them whenever you want too.

One of your Pokemon met its evolution criteria? You also do so from the menu. This may seem counterintuitive at first, but it’s actually great when you encounter situations where you don’t want your Pokemon to evolve immediately. And there are plenty of such situations, such as like keeping a team member unevolved to learn moves that its evolved form can’t learn, or just to learn moves at a lower level than the evolved form. For the latter, if you change your mind, a short accessing of the menu solves the problem, rather than having to wait for another level up.

Of course, not all of Pokemon Legends: Arceus is perfect, even on the gameplay side of things. Especially with the battle mechanics themselves, the simplified moves and stats changes are a change of pace, but understandably it’s probably not the best change to have set in stone. Some would argue that having Individual Values and Effort Values (IVs and EVs) simplified into just Effort Levels are also not the way to go, but the inherently RNG heavy side of the game should also see some form of streamlining.

That being said, the gameplay of Pokemon Legends: Arceus would have been perfect if it simply kept the original battle system and implemented all of its other changes. Which is why it was immensely disappointing to find out that, in addition to the technical issues, Scarlet and Violet also walked back on so many improvements found in Legends: Arceus.

Following the aftermath of Pokemon Scarlet and Violet, I find myself spending a lot of time in Legends: Arceus. And perhaps that is why I love this one game more than the other great games released this year. Not only is it a good game on its own, it’s also a yardstick for the franchise. It shows the heights that the franchise can reach just by acknowledging that the series has some rough edges, and taking the time to trim them off. At risk of sounding like a broken record, it’s so unfortunate that Scarlet and Violet decided that the rough edges are a part of the franchise’s identity and reintroduced them.

And on that broken record…

The post Pokemon Legends: Arceus Is My Game Of The Year 2022 appeared first on Lowyat.NET.