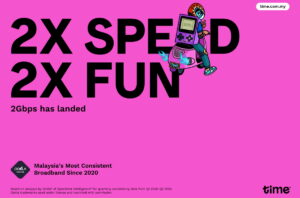 Just hours after its existence was confirmed, TIME Internet has now officially revealed its 2Gbps plan. The new offering is now TIME Fibre Home’s flagship plan, taking over the 1Gbps option that the company launched back in 2018.

Priced at RM379 per month, the 2Gbps plan has an upload speed of 500Mbps which is similar to existing 1Gbps and 500Mbps plans. In addition to receiving a 2Gbps Wi-Fi 6 router, customers will also be provided with two Wi-Fi 6 mesh nodes.

As part of the launch, TIME Internet will also provide RM200 worth of Touch ‘n Go eWallet credits to customers that signed up for the plan through its website. Furthermore, the ISP also said that it will be able to perform the same-day installation if they signed up before 10:00 AM although this depends on their locations.

TIME Internet noted that the new 2Gbps offering was made possible through the implementation of the 10G Passive Optical Network (PON) technology. The company has already worked on the technology since 2019 when it partnered with Huawei to build a pilot 10G PON deployment.

The asymmetrical 10G PON standard or the XG-PON1 allows transfer speeds of up to 10Gbps downstream and 2.5Gbps upstream while the symmetrical XG-PON2 calls for 10Gbps both ways. As a comparison, the previous GPON technology maxes out at 2.4Gbps down and 1.2Gbps up although there were some implementations that went for symmetrical GPON which delivers up to 2.4Gbps in both directions.

If you are wondering why the plan has not yet appeared on TIME Internet’s website at the moment, it is because consumers are only able to register for the new TIME Fibre Home 2Gbps starting from 7 October onwards. In addition to that, the ISP noted that this plan can only be obtained at select locations within TIME Internet’s coverage areas for the time being as its availability is being expanded in phases.