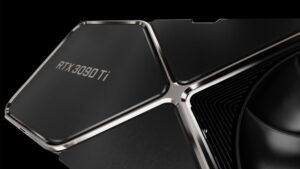 NVIDIA’s GeForce RTX 3090 Ti has, after much speculation and leaks from its rusty plumbing, finally and officially landed. As usual, the card is the latest addition to the GPU brand’s arsenal, as well as the direct successor to the non-Ti RTX 3090 that launched back in 2020.

Getting straight into it, the internal specifications of the RTX 3090 Ti include 24GB GDDR6X running at 21Gbps, 10752 CUDA cores, 78 RT-FLOPs, 40 Shader-TFLOPs, and 320 Tensor-TFLOPs. As it was with the RTX 3090, this card also has a 384-bit memory bus and supports all the usual accoutrements on tap from its parent company. That includes NVIDIA G-Sync, DLSS, Reflex, Broadcast, and a whole suite of Studio tools for creators. And of course, it’s going to scream at any game you throw at it right now, and do so at 4K.

Ports-wise, the card still retains the same three DisplayPort 1.4a ports and a single HDMI 2.1 port, all of which are capable of supporting resolutions as high as 8K60Hz. As for its base and boost clocks, those are rated at 1.67GHz and 1.86GHz, respectively.

Pricing for the NVIDIA GeForce RTX 3090 Ti starts at an eye-watering US$1999 (~RM8427) for the Founders Edition version of the card. With that, you can also expect NVIDIA’s AiB partners to also be launching the card with their own custom cooling solutions.