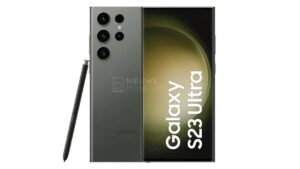 Image renders allegedly belonging to both the Samsung Galaxy S23 Ultra and S23+ have leaked. The pictures are by far the most detailed look of the phones to date and…well, they look virtually identical to their predecessors.

The alleged renders were first published on the Dutch tech site, Nieuwe Mobile, and show the camera placement, colours, and design of the new Galaxy S23 flagships. For the S23 Ultra, the colour schemes that the brand is introducing are Phantom Black, Cotton Flower, Botanic Green, and Misty Lilac. Likewise, those same colour options will also be available for the S23+.

With regard to their design, the back of the Galaxy S23 Ultra, specifically, appears to be flatter than its predecessors, while still retaining the five-camera sensor build. One major upgrade for the phone, though, is that its main sensor will be 200MP, and that it will have better autofocus and stabilisation. Earlier rumours also suggest that the Ultra’s lenses will also be bigger as well, although just how much bigger is anyone’s guess at this stage.

Beyong that, both the Galaxy S23 Ultra and S23+ are expected to run on Qualcomm’s next-generation Snapdragon 8 Gen 2 SoC which was announced last year in Hawaii, and that this will be the default chipset across the globe. The Korean electronic giant’s choice of chipset is obviously a continuity of its strategy when it employed the Snapdragon 8 Gen 1 with the S22 series, and is itself a step away from its usual strategy of reserving the Snapdragon processors for the US market. And its Exynos chips for both Asia and Europe.

Samsung is set to announce the whole Galaxy S23 lineup next month, during the first of its two Unpacked events of each year. Word is that the Korean brand may only be launching just two models, instead of the usual three. And given the frequency and focus of these leaks, it is looking more and more likely.