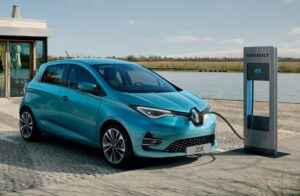 When it was rolled out in Malaysia in 2016, the Renault ZOE was one of the earliest full electric vehicles to be made available here alongside the Nissan Leaf three years prior. Fast forward to 2022, Renault’s distributor in Malaysia, TC Euro Cars has finally brought a much more up-to-date iteration of the compact EV to our market.

The new generation ZOE for Malaysia which was first announced by Renault back in 2019 is available in two variants including the Zen R110 trim which is equipped with an 80kW motor that provides 110PS (~108hp) of maximum power while its torque maxes out at 225Nm. On the other hand, there is also the Intens R135 trim which has been equipped with a much more powerful 100kW motor that has maximum power and torque rating of 135PS (~133hp) and 245Nm, respectively.

Aside from being more powerful than the original ZOE, another upgrade that the new iteration brings is a battery with a much larger capacity which naturally allows the new model to travel further than its predecessor. Both variants come standard with a 52kWh battery that can provide up to 395km of range (WLTP standard) for Zen R110 while the more powerful Intens R135 settles at 386km – a massive improvement over the original ZOE that can only go up to 210km.

Alongside their power output, the majority of other characteristics that separate the two ZOE variants apart got to do with their aesthetics. For example, the Zen R110 trim is only available in Black and Solid White while the more premium Intens R135 comes in Black, Blue, Purple, and Red.

The latter variant also features a diamond cut design for its 16-inch wheels. Below is a quick look at their main differences:

As for their pricing, the ZOE Zen R110 is available in Malaysia for RM163,000 without insurance and the higher-end ZOE Intense R135 goes for RM175,000. If you are in the market for a compact EV from the French company, you can book it right away at Renault Malaysia’s E-Store or reach out to the nearest Renault showroom.