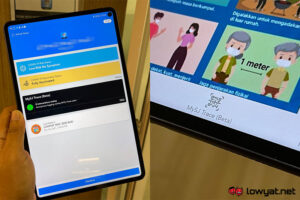 MySejahtera has rolled out an update with a new beta feature called MySJ Trace, which finally brings Bluetooth contact tracing to Malaysia’s COVID-19 app. The feature is meant to make contact tracing easier and more efficient as it doesn’t require any manual logging.

According to the MySJ Trace FAQ, the feature requires users to keep Bluetooth turned on at all times for participating devices to exchange proximity information. The app will then be able to notify the user if they have recently been near a person who has been found to be positive for COVID-19.

It says that the only data collected from the feature are the unique user ID created by the app, your phone’s operating system, the time of encounter, and the Relative Signal Strength Indicator.

Interestingly, iOS users only need to turn on Bluetooth while Android users will have to enable both Bluetooth and location permission. The app claims that your device’s battery life won’t be greatly affected as it uses Bluetooth Low Energy (BLE) to periodically transmit information instead of being continuously used.

This feature is similar to the previously released MyTrace app, which never really gained traction and now seems to have been removed from app stores. There’s also the possibility of a companion Bluetooth token coming soon for those without smartphones, similar to Singapore’s TraceTogether app and tokens.

The update is currently only available for Huawei devices through AppGallery on MySejahtera version 1.1.2, but it can be assumed that it will eventually be coming to Android and iOS. It also seems to have removed the “Check out” function on the check-in page, although it’s not certain whether this is a glitch or a permanent change.