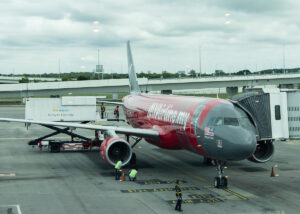 Flight bookings for MYAirline will commence later tonight, precisely at 12:01 am on 26 November 2022. This was revealed by the new low-cost carrier earlier today via its official social media channels on Facebook and TikTok.

One thing to keep in mind is that the booking period will only be open for a limited time until 30 November 2022. As previously teased, the new airline will be offering trips to Langkawi, Kuching, and Kota Kinabalu directly from Kuala Lumpur International Airport 2 (KLIA2), with the maiden flight scheduled to take off on 1 December this year. MYAirline’s video also confirmed that fares for all-in, one-way flights to Langkawi will cost RM 48, while flights to Kuching and Kota Kinabalu are priced at RM 68 and RM 88 respectively.

For the uninitiated, MYAirline’s offerings for destination choices are still pretty limited as it currently has a fleet of three active Airbus A320-200s in service. A fourth aircraft is currently undergoing a livery update, and will only enter operations at a later time. Whether or not the airline will add another destination to its list once the latest member of its fleet is ready remains to be seen.

Those interested to book their flights with MYAirline may do so via its official website by clicking this link. However, even though the website appears to be fully operational, keep in mind that the airline would only accept bookings later at midnight. Chances are, attempting to book now could potentially cause errors or provide bogus confirmations.