Here at CES 2023, MSI officially pulled back the veil that shrouded the Titan GT77 HX 13V, both the brand’s monstrous laptop and desktop replacement. What sets this year’s MSI Titan GT77 laptop apart from its predecessor isn’t just its innards but also what it has to offer visually.

For a start, the new Titan GT77 is one of the first of its parent company’s laptops to offer a model sporting a 17.3-inch 4K Mini LED IPS display, complete with a 144Hz refresh rate, HDR, and a peak brightness of 1000 nits. This is luxurious feature is basically the culmination of MSI’s research in the technology which it first introduced back in 2019. 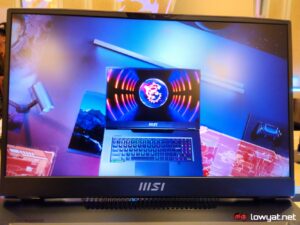 Naturally, the Titan GT77 is also decked out with MSI’s Mystic RGB lighting, which is now visible via the grille at the back of the laptop’s spine, through the keyboard, and even the brand’s insignia at the back of the panel. On the subject of its keyboard, the one in this machine uses what the brand calls a unique Cherry MX Ultra low-profile mechanical keyboard, tailored specifically to the design of the laptop. And offers a “crispy” tactile and precise actuation during typing sessions.

Beneath the hood, the Titan GT77 sports a new Intel 13th Gen Core i9-13980HX CPU, one of the chipmaker’s most powerful Raptor Lake mobile processors in the range. Specs-wise, we’re looking at a 24-cores, 32-threads unit, with eight P-Cores and 16 E-Cores, running at 5.2GHz on all P-Cores, to 5.6GHz on just two P-Cores when running at full whack. Like all Intel HX Series CPUs, this model is also overclockable and to that end, and can be done via MSI’s OverBoost Technology, should you so choose to. Because it is running on an Intel 13th Gen CPU, that also means the component is flanked by both DDR5 RAM and PCIe Gen5, to which the Titan GT77 can be fitted with up to 128GB of DDR5-4800 RAM, and access to NVMe Gen5 SSD speeds, to which one slot inside this hunk of portability is compatible with. The other two, however, are PCIe 4.0 compliant.

As for its GPU, MSI is clearly sparing no expense for the Titan GT77, to which the laptop is can be fitted with either an NVIDIA GeForce RTX 4080 12GB or an RTX 4090 16GB mobile GPU, both of which have a maximum TDP of 175W. Beyond that, the Titan GT77 also comes with a healthy number of I/O Ports, ranging from USB-C Thunderbolt 4 ports, USB-C 3.2 Gen2 ports, a mini DisplayPort, HDMI 2.1 port, and an SDCard reader and Killer Gb LAN port. Oh, and there’s also the Killer AX Wi-Fi 6E and Bluetooth 5.3 support built in.

As of now, the only detail missing from the equation is the pricing of the Titan GT77, a detail that we’re guessing will only be made available a little later down the road. If our estimates are correct, and if MSI’s habits are anything to go by, local pricing for the laptop at the annual event could come as early as this month.