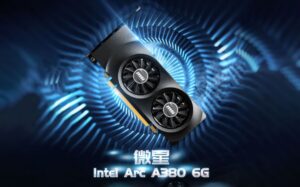 MSI has seemingly decided to (sort of) break its silence surrounding Intel’s ARC graphics card lineup and announced its first iteration of the A380. Interestingly enough, it’s a low profile Alchemist card, with the aim of being shipped out with the brand’s pre-built systems.

By the looks of it, MSI isn’t pulling any rabbits out of the hat with this A380; based on the specs of the card, it’s running purely on Intel’s default settings for it, which basically means that there is no factory overclocking. On paper, the GPU comes with 6GB of GDDR6 graphics memory, running at a speed of 15.5Gbps.

Still on the subject of MSI’s A380 card, it also keeps its default TDP of 75W, along with a boost clock of 2000MHz, as well as a memory bandwidth of 185GB/ and 96-bit memory bus. Oh, and it also has eight Xe-Cores. For cooling, the cards seems to utilize a simple two-fan configuration, placed upon a relatively thin heatsink. Other specifications of the card include one DisplayPort port, along with a single HDMI port.

Again, this A380 isn’t going to be widely or readily available to the masses and will be bundled as part of MSI’s pre-built PCs. On top of that, it will only be available for customers in China, at least for the mean time. On that note, the prebuilt system being offered will also be available in a limited variety of configurations. By that, we mean that the other primary components are also Intel products, and that they range from an entry-level 10th generation Core i3-10105F, all the way up to the more up-to-date 12th generation Core i5-12400F. And yes, those are the mobile CPU variants that MSI is using, and not the full-sized desktops CPUs.