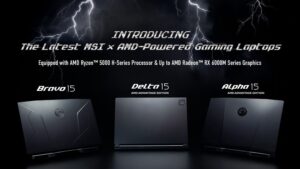 MSI has announced its AMD Advantage Edition gaming laptops which, as the name implies, are laptops with components that are made up primarily of AMD components. Then, as now, the lineup includes revamped Alpha 15 and Bravo 15 models, along with a new Delta 15 unit.

Specs-wise, the Bravo 15 is the entry-level series of the trio: components for the lineup starts with an AMD Ryzen 5 5600H CPU but there is also a variant with a Ryzen 7 5800H. For the GPU, both variants only ship out with a Radeon RX 5500M with Full HD display panels. However, it should be noted that the display for the model with the 5600H has a 144Hz refresh rate, while the 5800H is, oddly enough, limited to the standard 60Hz.

Moving up the line, the Alpha 15 – based on the product’s official landing page – is the brand’s “middle ground” AMD Advantage Edition gaming laptop. There’s only one variant available here and at RM5299, you get Ryzen 5 5600H, Radeon RX 6600M with 8GB GDDR6, a 15.6-inch Full HD display with 144Hz refresh rate.

Sitting pretty at the top is the Delta 15 and these are MSI’s top-tier AMD Advantage Edition models. Like the Bravo 15, the Delta 15 comes in two CPU flavours: the base model houses a Ryzen 7 5800H CPU, while the top model houses the overclockable Ryen 9 5900HX CPU. As for graphics and display output, both units are fitted with a Radeon RX 6700M with 10GB GDDR6 memory and 15.6-inch Full HD panel with a maximum refresh rate of 240Hz.

The Delta 15 starts at RM7499 for the model with the 5800H, while the model with the 5900HX retails for RM7899. As is the case with AMD Advantage Edition gaming laptops, all three MSI laptop series have access to AMD exclusive features, including SmartShift, Smart Access Memory (SAM), along with Radeon Anti-Lag.

Additionally, consumers who choose to purchase any of the new MSI AMD Advantage Edition laptops from now till 31 December will receive a free copy of Far Cry 6 and Resident Evil Village.