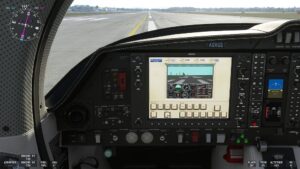 There have been many attempts to make the classic version of Doom playable on platforms that it wasn’t meant to be played on. This included inside some other games. For the 40th anniversary of the Microsoft Flight Simulator, the company decided it would do something similar as a special celebration of the series. With an update to the new game, you can play the old versions within the new one.

To access this easter egg, you’ll need to get into the cockpit view of a Diamond DA62, an the set the ELT to On. This will then run one of the classic versions of the Microsoft Flight Simulator on one of the screens in the plane. You can pick either of the four old versions of the game, the oldest of which was released all the way back in 1982, hence the 40th anniversary update.

These older versions of the Microsoft Flight Simulator are all fully playable too. The experience may not be optimal since you will be playing them on a much smaller screen, but otherwise they function as they did all those years ago. Playability aside, it’s still a nice easter egg for players of the current game who had experienced the original from way back when.

While this is a pretty significant easter egg for the Microsoft Flight Simulator, it is, understandably or otherwise, not actually listed in the patch notes. On one hand, if it was listed, it won’t be that much of an easter egg when the surprise is spoiled. But on the other, its significance and specific activation method may have warranted a listing.

Naturally, the 40th anniversary update of the modern Microsoft Flight Simulator wasn’t just for this throwback. There’s a major list of improvements, bug fixes and new content that came in tow as well.

The post Microsoft Flight Simulator Update Allows You To Play Old Versions Inside The New One appeared first on Lowyat.NET.