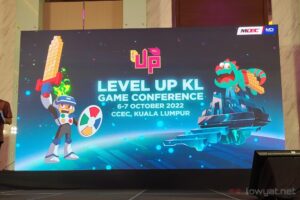 The MDEC-organised Level Up KL event is back for its eighth iteration this year. As is usually the case, the event is organised to elevate the local video game industry. And following a couple of digital editions due to the COVID-19 pandemic, the event is now back to its physical format.

Notably this year though, in addition to the multitude of workshops and conferences, MDEC has signed three Memorandums of Understanding (MoUs). These are with Nine66, a Savvy Games Group-owned company that publishes games for and from the Arabic Markets, as well as home-grown Magnus Games Studio and digital store SEA Gamer Mall.

The first of the three is probably the most significant one. As mentioned, Nine66 is owned by Savvy Games Group, a state-owned company of Saudi Arabia. As a publisher for games in the region, the MoU signing between it and MDEC will promote game development collaboration between the country and Malaysia. This also means overseas internship opportunities for local game devs, exposing them to the way the industry works in other markets.

As for Magnus Games Studio, you’ve probably heard of the name if you’re familiar with its game, Re:Legend. Signing its MoU with MDEC sees it being the company to promote the upcoming Malaysia Digital Content Festival (MYDCF) 2022. The event is happening in the tail end of the year, in conjunction with Comic Fiesta. The studio will also be the one to promote MDEC’s metaverse initiatives and projects. SEA Gamer Mall, being a global digital store, will be responsible for promoting local game products and “increasing IP commercialisation” in the region.

Back to Level Up KL 2022, the industry workshops and conferences started earlier in the week, on 4 October. The event wraps up tomorrow, on 7 October. You can find out more about the event, as well as the aforementioned upcoming MYDCF, by hitting the links below.