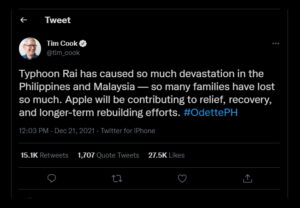 Apple rarely mentions Malaysia’s name as compared to its main markets such as the United States, China, Europe, and Singapore. But when that actually happens, it is often related to something quite significant like how the company achieved massive growth in our country between 2019 and 2020.

A more recent example comes in the form of a tweet by its CEO, Tim Cook who has said that Apple will provide assistance for the relief, recovery, and rebuilding effort in Malaysia and the Philippines. Both of which, as most of us are aware by now, have been badly hit by Typhoon Rai.

Immediately, Malaysian Twitter users responded to Cook’s tweet, asking Apple not to channel its aid to the government due to concerns of mismanagement. Instead, they have asked the tech giant to offer their help directly to the NGOs.

For context, many have criticised the government and related agencies such as the National Disaster Management Agency (NADMA) for their extremely slow response to the flood, which has since claimed 27 lives and displaced more than 70,000 people throughout the country. It has also been reported that NADMA and the Selangor state government might be the cause behind the delay of the army’s deployment into affected areas, although this has since been brushed off by both parties.

Many netizens also expressed their dissatisfaction with the government and have been asking people not to donate to the relief funds established by government agencies. This is because many feel that the donations would be utilised properly by NGOs and volunteers instead.

For example, a thread by Twitter user azliaabdaziz that depicted relief funds created by government agencies including the National Welfare Foundation alongside the Ministry of Environment and Water as fake has gained thousands of retweets. In addition, “NGOs” as well as “DO NOT DONATE TO GOVERNMENT” have been the top trending topics on Twitter in Malaysia since earlier this afternoon.

Meanwhile, Cook did not provide any in-depth details regarding Apple’s plan to help with the flood relief effort in Malaysia. Nevertheless, it is good to know the recent flood crisis has managed to catch the world’s attention.

The post Malaysians To Apple: Deliver Flood Aid To The NGOs, Not Government appeared first on Lowyat.NET.