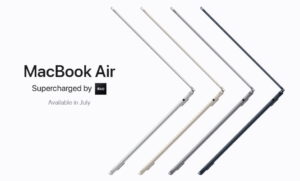 Just days after the company starts shipping the M2-based MacBook Pro 13 to Malaysian customers, Apple has since revealed that the equally new MacBook Air M2 will be heading to our shores in July.

This is according to the notice on Apple Malaysia’s website although the exact shipping date remains unavailable. When it comes to the price tag, it remains unchanged as per our previous report.

The base configurations for the MacBook Air M2 include the 8-core GPU version of the chip, 8GB unified memory, and 256GB SSD for RM5,499. One can push the specs further up to 24GB memory, and 2TB SSD which would raise the price to RM10,299.

Regardless of memory and SSD choice, MacBook Air M2 with 8-core GPU comes standard with a 30W USB-C power adapter. If you prefer the higher-wattage 67W power brick or the new 35W Dual USB-C Port Power Adapter, you then have to fork out an additional RM80.

This also applies to the base configuration of the MacBook Air M2 with 10-core GPU which has 8GB memory, and 256GB for RM5,899. However, once you bump up the storage to 512GB which would then increase the price tag to RM6,699, then only you get to choose either the 67W solo USB-C or 35W dual USB-C power brick without additional cost.

Do note that the MacBook Air M2’s fast charging feature requires the 67W USB-C power brick although it is hard to deny the convenience that the 35W dual-port charger is able to provide. Meanwhile, the fully maxed out 10-core GPU option for the laptop carries 24GB memory and 2TB storage alongside a price tag of RM10,699.

When you put their price tags side by side, then you will notice that the MacBook Air M2 with 10-core GPU costs RM200 more than its MacBook Pro 13 counterpart. Now that Apple has revealed the general launch month for the new laptop in Malaysia, expect it to pop up at Apple Authorised Resellers stores within the next few weeks if you are not fond of getting MacBook directly from Apple Malaysia’s online store.

The post MacBook Air M2 To Be Available In Malaysia This July appeared first on Lowyat.NET.