Louis Vuitton is one of the biggest names in the fashion world but some may not be aware that the 168 year old Paris fashion house has also dabbled a little bit in wearables for the past few years. One recent example is the new Tambour Horizon Light Up connected watch which is now available in Malaysia.

Powered by Qualcomm Snapdragon Wear 4100 processor alongside 1GB of RAM and 8GB internal storage, the new watch runs on its own custom-designed operating system. It also comes with 1.2-inch 390 x 390 AMOLED touch screen that is housed in a 42mm stainless steel case and protected by sapphire glass.

There is also a set of the iconic Louis Vuitton Monogram flowers on the curved edges of the watch’s screen which houses 24 LED lights that would spring into action whenever the watch is activated or receives a notification. When users right swipe touch display, it will bring up the watch’s My Day section which is where they can check out their agenda of the day, weather & air quality report, step count, and heart rate.

Once they swipe left, the My Travel section will then appear in which users can check out their travel plans, boarding passes, and any of the 30 curated city guides by Louis Vuitton. In addition to that, users can access their notifications and settings by swiping up and down, respectively. 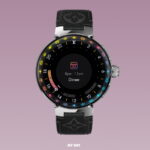 Users can also activate the watch face shuffle mode by using the mechanical push button on top of the Tambour Horizon Light Up’s crown while the bottom button acts as the quick shortcut for the users’ favourite app on the watch.

Despite running on its own operating system, Louis Vuitton has noted that its connected watch is a Made for iPhone certified device while still can be used with Android as well as HarmonyOS devices. Interesting enough, the watch is also able to support Alipay contactless payment system through NFC.

Meanwhile, Louis Vuitton refers to the Tambour Horizon Light Up as the most customisable connected watch in the world and one of the main ways that the fashion house intends to deliver this is via the watch face. There are eight built-in dial configurations to choose from with a variety of colour options and users can also input their own initials, complete with their own choice of typeface as well as colours.

The customisation can be performed through the Louis Vuitton Connect app which also allows users to add the information of their trip for the watch’s My Travel section. The fashion house has committed to releasing additional watch faces with various themes all year round including collaborative releases, seasons, and fashion shows as well as selected celebrations such as Christmas, Lunar New Year, and Valentine’s Day.

Together with a water-resistant rating of 30 metres, Louis Vuitton said that the Tambour Horizon Light Up has all-day battery life. The watch’s strap can also be easily interchanged with other Louis Vuitton Tambour straps as they all share the same patented quick release system.

Price-wise, the variant with polished stainless steel case goes for RM15,000 which is not yet available through Louis Vuitton Malaysia’s online store though. However, the higher-end variant with sandblasted stainless case and PVD coating in Matte Black or Matte Brown can be obtained through the store at RM18,100.