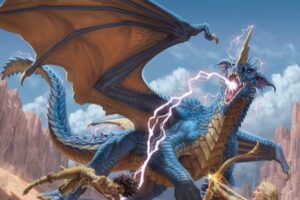 While not directly video games-related, tabletop roleplaying games are gaming adjacent enough that you’ve likely been exposed to them somewhat. And if you have, then chances are you’re aware of the whole mess that is the Dungeons and Dragons Open Gaming License, which will be abbreviated as DnD OGL from now on. While the entire debacle has concluded somewhat, it remains another cautionary tale in the gaming industry, be it of the digital or physical kind.

That being said, it’s an all-too-familiar story, and it certainly won’t be the last of its kind just as it’s far from the first. With that in mind, it’s probably less of a lesson and more of a revision.

For those who have been out of the loop, Wizards of the Coast, a Hasbro subsidiary and owner of DnD, first published the OGL, dubbed version 1.0a back in 2000. There are a ton of specifics which I won’t go over, but the gist of it is that the open gaming license allows third parties to create their own content using the DnD system – be it their own adventures or rulebooks. Essentially, this is WotC open-sourcing their copyrighted IP to a limited degree. This allowed a slew of other TTRPG publishers to sprout and thrive, and it’s perhaps only a slight exaggeration to say that an entire industry was built on this OGL.

But all this changed earlier this year, when a document that was claimed to be the draft of OGL v1.1 was leaked to Linda Codega of io9 / Gizmodo. The new version of the document would strangle the free use of DnD rules in other TTRPGs, it would mean that makers of OGL-based products must report all their earnings to WotC. And if anyone made OGL-based products earned over US$750000 (~RM3.2 million) in revenue, they will have to pay a 25% royalty fee to WotC. This is in addition to WotC – naturally – claiming the right to use any OGL-based content, without any royalties going to the actual creators.

The backlash from the TTRPG community was swift, but not necessarily strong at first. A follow up report by Codega claims that WotC and Hasbro higher-ups were about to handwave the entire situation away as fans overreacting, with the mindset that it will all blow over in a few months. It wasn’t until an insider leaked the decision-making process of the executives did a more meaningful protest start to gain momentum.

Huge leak from an insider @Wizards

It’s what we feared: the higher ups despise us, the D&D community, and see us only as an “obstacle to their money”.

Subs on D&D Beyond are all WotC care about, so I’ve cancelled mine. Let your voice be heard #opendnd #StopTheSub pic.twitter.com/LhaBM4tGML

As shared by content creator DnD Shorts on Twitter, the insider makes a couple of claims that are both depressing and predictable. One is that WotC management views the TTRPG community with disdain, and “see customers as obstacles between them and their money”. Another is that the only metric that would make the company chance course is not the backlash to the changes to the OGL, but to the company’s bottom line – with DnD Beyond subscriptions being the “quickest financial data they currently have”. For context, DnD Beyond is a subscription service that provides subscribers with easy digital access to all DnD-related resources, from rulebooks to supplements like a detailed character builder, digital character sheets, an encounter builder and even a Twitch overlay.

From there the fan movement known as #DnDBegone was born, which saw fans unsubscribing from DnD Beyond en masse. According to the aforementioned follow up report by Codega, this meant having to manually submit a support ticket to WotC for a customer service personnel to process. Despite this less-than-simple process, the early stages of the backlash still saw subscription cancellations in the “five digits” range. It’s only from here did we see the first attempt by WotC to walk back some of the changes, but even that was not a process without hiccups. The first apology was insincere at best, being devoid of details and deflecting most of the criticisms while trying to disguise their strong-arming efforts as a way to gather “feedback”. It would be five days later before Kyle Brink, the executive producer of DnD, to offer an actually sincere apology, with details as to what exactly is being walked back.

Beyond DnD (no pun intended), other publishers have started either drifting away from the OGL, or started their own. Probably the most notable one is the Open RPG Creative License (ORC) by Paizo, the publisher of Pathfinder and Starfinder TTRPGs.-

What even led to this?

A fair question to ask at this point is “why did this happen”? Or more specifically, why did WotC suddenly decided to come up with a new OGL revision when the existing one had been around for over two decades just fine? The answer is surprisingly simple and depressing – the company got greedy.

As Dicebreaker reports, during an investor-focused web seminar last month, Hasbro CEO Chris Cocks and WotC CEO and president Cynthia Williams were discussing the future of DnD. The latter reportedly opened with this familiar phrase: “D&D has never been more popular, and we have really great fans and engagement. But the brand is really under monetised”. She would go on to say that she wants the brand to “unlock the type of recurrent spending you see in digital games”. However, for an industry where half a medium is physical (where you can’t do microtransactions and season passes that’s practiced in video games), the company’s alternative was apparently royalty fees.

If that opening statement sounds familiar, it’s because we’ve heard it before half a decade ago, from another executive – Take-Two Interactive CEO Strauss Zelnick. According to GameSpot, Zelnick claims that “We’re not going to grab the last nickel”, while only a two short years later allowing the company to release NBA 2K20 with a literal slot machine in it.

But going back to DnD, it really doesn’t help that December was also a month with a lot of uncertainty regarding the OGL in the first place. Add that to what the CEO of WotC said during the investor seminar and the ill-conceived OGL revision was the only logical conclusion.

What can we learn from all this?

Or relearn, since as mentioned, these are all familiar stories that we’ve all seen before. But all the same, for those who haven’t spent much time at the video games industry, there are a few main lessons that we can learn from all this. In fact, there are three, or two depending on the way you want to look at it

Voting with your wallet works

If there’s one thing that Hasbro and WotC has shown us throughout this whole DnD OGL drama, it’s that voting with your wallet works. When a company you like is doing something self-destructive in the name of more money, depriving them of money that they take for granted is about the best way to make sure they listen to feedback. And it’s a lesson that’s especially worth relearning since we all know gamers are very bad at this.

Voting with your wallet is the only thing that works

Related to the point above, but this is especially poignant this time around with the revelation by the WotC insider. It couldn’t be made more clear that backlash is not a form of feedback that the bean counters get, and in the same vein, the only language that many decision makers understand is the bottom line. At least for this one company, it would seem like the goal of making a product worth buying and getting paid for making it has been warped to making money being the main goal, with the method being no object as long as it doesn’t lead to losing money.

In a way, this may be a very cynical way of looking at things, but it’s difficult to come to any other conclusion following this whole episode. But as most of us are aware by now, we’ve seen similar things in the video games industry. With the proliferation of microtransations, season passes and other forms of cutting up a complete game and selling them back as “extra content”, these things keep coming back because people keep buying them.

Brand loyalty is detrimental to everyone

DnD had an OGL that stood the test of time, allowing the tabletop industry to bloom in ways it likely wouldn’t otherwise. But the company decided in its need for money that compromising such a good product was a good idea. Similarly, we’ve seen in the video games industry with every generation of the console wars – the company with the better performing console sales-wise overreaches in the next generation, only to be the better one again after eating humble pie.

Of course, as mentioned, none of these lessons are new, be it for the video games industry, the tabletop industry, or any other for that matter. And just as sure as the sun will rise in the east, another company will remind us of these lessons somewhere down the line.

And on that bombshell…

The post Lessons We Can Learn From The Dungeons and Dragons Open Gaming License Debacle appeared first on Lowyat.NET.