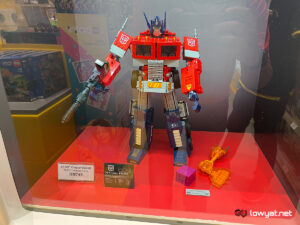 Geeks and children of all ages rejoice. The much anticipated LEGO set featuring legendary Autobot commander Optimus Prime from Transformers is now in Malaysia via local certified LEGO retail store Box of Bricks.

Just in case you missed it, LEGO previously unveiled the set last month as part of a special collaboration with toy giant and Transformers franchise owner Hasbro. In addition, the Optimus Prime set marks the first time that a character from the popular franchise has officially been made available in a buildable bricks form outside of Hasbro’s own Kre-O toy line.

LEGO’s take on the Autobot commander consists of over 1,500 bricks and will stand at a height of over 13.5-inches in robot form when built – taller than its MP-44 Transformers Masterpiece counterpart which stands at around 9.5-inches. Additionally, the completed figure comes with 19 points of articulation for not only limb movement, but for transformation as well.

And yes, you read that right. The LEGO Optimus Prime can actually transform into his iconic truck mode, which is also impressively detailed as his bot form. The Danish toy maker notes that in this mode, Prime measures around 5.5-iches high, 10.5-inches long, and 4.5-inches wide.

Included in the set are a set of extra goodies and accessories for the character including a plaque, an energon cube, Ion Blaster, Energon Axe, jetpack, and the Autobot Matrix of Leadership. The latter, as you may have expected, can be stored in Prime’s chest compartment.

Unfortunately, the character’s trailer is nowhere to be found in this set, which is probably for the best. Including it would increase the overall packaging size and, of course, skyrocket its pricing even more. Speaking of which…

The new LEGO Optimus Prime kit is retailing at RM 749 locally. And as mentioned earlier, those interested may roll out to Box of Bricks’ online store and its physical stores nationwide to pick up the set.