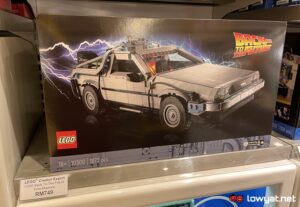 Even though it has been more than 30 years since Back To The Future (BTTF) films graced the movie screen, their effect on popular culture remains intact today. While we still don’t have any proper time machines, flying cars, or hoverboards (the Nike self-lacing shoes did become a reality though) in 2022, we can at least have fun with the new LEGO BTTF Time Machine set which has since made its way to Malaysia.

While this is not the first time that Lego has come out with a DeLorean Time Machine, the 2022 release is certainly much more elaborate than the version that the company released in 2013. That being said, the 2013 version was still a legendary release anyway as it was one of the first fan projects that made it to retail via the Lego Ideas banner.

Primarily designed for Adult Fans of LEGO (AFOLs) out there, the 2022’s DeLorean Time Machine set has 1,872 pieces. You can choose to build any of the three Time Machine iterations that you have seen in the BTTF films although you are limited to one version at a time.

The set also comes with extra items such as Dr Emmett ‘Doc’ Brown and Marty McFly LEGO Minifigures as well as Marty’s hoverboard, Doc Brown’s plutonium case, and OUTATIME licence plate. Of course, being a rather elaborate recreation of the DeLorean Time Machine means that it also comes with a hefty price tag.

As you may notice from some of the images above, the Malaysian price for the set is RM749 which is slightly more than its US pricing of USD169.99 (~RM716) although still cheaper than Europe and the UK as it is listed as EU169.99 (~RM791), and GBP149.99 (~RM830), respectively over there. Given what we have seen at LEGO Store Mid Valley Megamall, the set should be available at other LEGO Stores all over the country as well.

The post LEGO Back To The Future Time Machine Now Available In Malaysia For RM749 appeared first on Lowyat.NET.