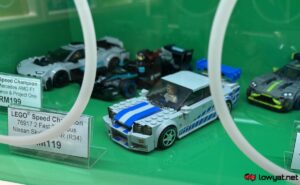 When the existence of this particular LEGO Set was made known to the public last month, it immediately send waves throughout the world and like clockwork, it is now in Malaysia. While LEGO Speed Champions might be designed for children aged 8 years old and above, we reckoned many cars or movie buff out there might be interested to get their hands on this reincarnation of Nissan Skyline GT-R R34 from 2 Fast 2 Furious.

While the car’s appearance was limited to the early portion of the movie as its driver, Brian O’Conner (played by the late Paul Walker) was then forced to switch to Mitsubishi Lancer Evolution VII, the GT-R R34 was still a huge hit among fans. Of course, this does not really come as a surprise given that the Japanese high-performance car has a huge cult following as it was adored by throngs of car enthusiasts all over the world.

Since this is a LEGO Speed Champions release, accuracy might not be that high on the list. So, purists out there may want to excuse the company for missing out on several details on its GT-R R34 replica such as the aftermarket brands that are supposed to appear on the car’s hood and bumpers.

Nevertheless, we reckoned that the car’s signature paint job as well as blue stripes and rear wing were nicely adapted for the replica. It even comes in right-hand drive just like the unit that was featured in the movie.

The 319-piece set also comes with a Brian O’Conner minifigure which is a nice touch by LEGO. When it comes to price tag, the new LEGO Speed Champions 2 Fast 2 Furious Nissan Skyline GT-R R34 can be obtained in Malaysia for RM 119 or RM119.90, depending on where you purchase it.

Based on our own experience, stocks are rather limited and we were only able to purchase it in the latter part of the week even though the set was rolled out into stores on Monday, 2 January. So, you may want to give a call to the nearest LEGO Certified Store first to check actual in-store availability or consider visiting other authorized LEGO retailers such as Toys”R”Us, AEON, and more.