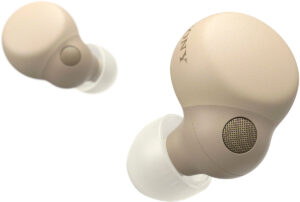 Looks like the WH-1000XM5 headphones aren’t the only unannounced audio device from Sony that has been leaked recently. Also finding its way online are product renders featuring allegedly upcoming earbuds, which are claimed to be marketed under the company’s recently debuted LinkBuds brand.

As you may recall, the initial Sony LinkBuds featured an unconventional open-back design, allowing for external noise to pass through while music is being played. The supposedly next entry to the series, however, is shown to feature a more basic earbuds body – appearing almost identical to the company’s WF-1000XM4 buds that were released last year. If accurate, this would also suggest that Sony won’t be restricting the use of its LinkBuds branding to devices that only promote situational awareness.

According to SnoopyTech (the leakster who shared the renders), the upcoming LinkBuds will bear the model number S/WF-LSN900 and are offered in two colour options: tan and black. Besides that, he also added that the device will feature the ability to “seamlessly shift from ambient sound to advanced noise-cancelling” and “enable automatic playback that learns from your behaviour.”

The former seemingly implies the typical ANC capabilities found on most noise-cancelling equipped earbuds that allows for the filtering or passthrough of external noise at the user’s command. It is unclear to what the latter meant, though it could be referencing certain features such as in-ear detection, which automatically pauses music playback when the user removes an earbud from their ear.

It is unclear whether the newer S/WF-LSN900 LinkBuds are aimed to be the more affordable option to Sony’s flagship WF-1000XM earbuds series. Unfortunately, SnoopyTech did not provide any information regarding the device’s hardware specifications or mention its expected launch date.