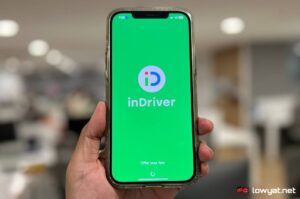 The Road Transport Department (JPJ) recently revealed that it conducted a raid on InDriver Malaysia’s office earlier this month. According to the statement on the agency’s Facebook page, the international e-hailing outfit who is run by Hi Tech Mt Sdn Bhd in our market, has been operating with an expired licence.

As the story goes, this is not the first time that licencing issue has plagued InDriver Malaysia though. Back in June 2020, Malaysia E-Hailing Drivers Association advised e-hailing drivers and users not to utilize InDriver as the service was operating without a valid licence at that time.

It is unclear when exactly InDriver obtained the necessary permit from the authorities after that but it appeared that the service sorted out the issue when InDriver Malaysia was formally introduced in October 2021. According to the Internet Archive Wayback Machine, InDriver’s name was inside the APAD e-hailing license holders list dated 24 December 2021 up till 7 June 2022 but has since been removed from the latest list that was updated on 12 September 2022.

The statement by JPJ did not reveal when exactly InDriver Malaysia’s expired but we believe a prior statement from the Ministry of Transport (MoT) may have provided some clues. Dated 30 August, the ministry’s statement did not mention any names although has noted that the unnamed e-hailing operator’s licence expired on 14 July 2022.

MoT also pointed out that the company was denied from renewing its e-hailing operator licence because its app is not able to display the driver’s E-hailing Vehicle Permit (eVP) or allow passengers to identify their drivers. This seemed to be in line with what InDriver Malaysia has told Free Malaysia Today that the Land Public Transport Agency (APAD) has asked to make some adjustments to its app before the licence renewal application can go through.

Despite all the things we have highlighted above, it seemed that InDriver Malaysia has yet to suspend its operations though. When we run the app prior to the publication of this story, we can still see driver offering their services on the InDriver app as shown below:

Meanwhile, JPJ in its statement has urged consumers to only utilize licensed e-hailing operators so that they are covered by insurance during their ride. Given that, you may want to avoid using InDriver for the time being until the company sorted out its issues with the authorities.