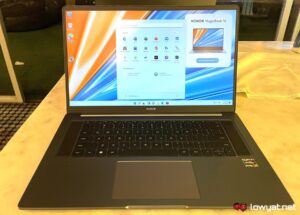 Alongside the new X Series smartphones, HONOR has just officially launched the HONOR MagicBook 16 laptop in our market. As you may be able to tell from its name, this new model brings together a much larger display and a more powerful chip than the company’s previous AMD-based MagicBook.

For starters, the new laptop rocks a 16.1-inch Full HD IPS display with a 144Hz refresh rate which could be enticing for gamers out there although the integrated Radeon Graphics within the AMD Ryzen 7 5800H processor would limit them from graphics-intensive titles. It also comes standard with 16GB of dual-channel DDR4-3200 RAM and 512GB solid state drive.

The MagicBook 16 also has a fairly slim and lightweight design for its screen size with a thickness of 18.2mm and weighing around 1.84kg. Just like other MagicBooks before it, the new laptop also features a unibody aluminium chassis.

Equipped with a fingerprint scanner that also doubles as a power button alongside speakers enhanced by Nahimic and a 720p webcam, the laptop also sports two USB-C 3.2 Gen 1 ports, two USB-A 3.2 Gen 1 ports, an HDMI port, and a 3.5mm combo audio jack. When it comes to wireless connectivity, MagicBook 16 supports dual-band Wi-Fi 6 and Bluetooth 5.1.

Battery-wise, HONOR claimed that the laptop’s 56Whr battery can deliver up to 8 hours of full HD video playback. The MagicBook 16 is accompanied by a 65W USB-C charger that allows the laptop to gain back 85% of its battery capacity with just 1 hour of charging time.

Available in Space Gray, the MagicBook 16 is currently available for pre-order with a price tag of RM4,299 until 13 April 2022. Pre-order customers will receive a freebie set that includes an HONOR MagicWatch 2, a 1-year subscription to Microsoft 365 Personal, a laptop backpack, and a wireless mouse as well as a separate 1-year Battery Care protection on top of the company’s standard 1-year general warranty policy.