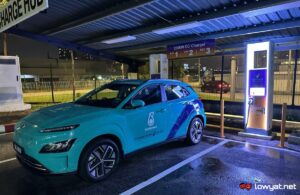 Petronas green energy subsidiary Gentari has joined forces with the operator of the JomCharge EV infrastructure network, EV Connection to set up a massive EV charging hub at the X Park Sunway Serene in Kelana Jaya. In addition to having 10 charging bays, another major attraction of the charging hub is its 350kW DC fast charger.

Ahead of its launch today, I took the liberty to visit the spanking new charging hub last night to take a closer look. According to initial information from Gentari, this is the first 350kW DC fast charger implementation in Southeast Asia.

Given the output rating, the charger is essentially not only more powerful than the 180kw Shell Recharge chargers but it has generally surpassed the Tesla Supercharger which has a peak output of 250kW. At the moment, there is only a handful of EVs that have been officially released in Malaysia that can fully benefit from the 350kW charger.

Among those are BMW iX, BMW i4, BMW i4 M50, Hyundai Ioniq 5, Kia EV6 GT, Mercedes EQS 450+, and Porsche Taycan. For those who wonder what is the actual equipment behind the Gentari and JomCharge branding, you are looking at ABB Terra High Power Gen III charge posts.

According to the label on one of the charging stations, that particular unit was manufactured on the 24th week of this year which put it sometime between 13 to 19 June. Manufactured in Italy (at ABB’s spanking new in Tuscany, I presumed), each of these IP54-rated charging stations features a liquid-cooled 500A charging cable with a CCS2 connector, a 15-inch touch display, and very bright LED lights.

When compared to other DC fast chargers that you may have spotted before such as the ABB Terra 54 or even the ABB Terra 124 that is being used for two other charging bays at Gentari x JomCharge X Park Sunway Serene hub, you may notice the 350kw charge posts have a more compact footprint.

This is because the power cabinets for them are actually located a few meters away from the charging hub itself. Meanwhile, you can also see from the picture that there are three parking spots for 350kW charging even though there were only two charge posts.

According to the information on ABB’s website, the Terra High Power Gen III Charger layout maxes out at two charge posts. However, there is a concrete base in front of the third parking spot which should have no problem fitting a high-powered standalone DC fast charger such as the ABB Terra 360 which can deliver 360kW of power. Then again, the Terra 360 charger was designed to charge four EVs at once, so it would be a waste if the charger is used just for this particular charging bay.

Through ABB Dynamic DC power sharing technology, the dual charge posts setup can automatically set its power output depending on the number of EV that occupied the charging bay. If there is only one vehicle, the charger can go all the way up to 350kW/500A and would split it to 175kW/375A when both charging posts are being utilized at the same time.

Since I visited the Gentari x JomCharge charging hub ahead of its official launch, it is not surprising that the chargers are not yet in service. At the moment this first look is published, the charging fee for the 350kW supercharger as well as other chargers at the hub has not yet been revealed.

In terms of activation and payment, it goes without saying users will be able to utilise them by using Petronas’ Setel and JomCharge mobile apps. More information regarding the new charging hub by Gentari and JomCharge should be revealed at today’s launch event, so stay tuned for the follow-up reports at Lowyat.NET.