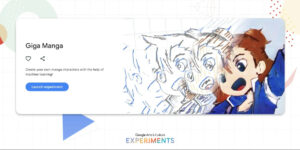 Announced as part of the ‘Manga Out Of The Box’ collaboration with the Japanese ministry of economy, trade and industry, Google has introduced an AI-based experimental web app called Giga Manga. With this, users are able to create their very own manga characters with a simple sketch, which would then be enhanced by the app’s machine learning capabilities.

While its name may sound stylised, ‘Giga’ is actually a reference to the Chōjū-giga scrolls from the 12th and 13th century of Japan, which some historians believe to be the first mangas ever created. The term itself literally means ‘caricature’, which fits the app’s overall function.

When launching the web app, Giga Manga presents you with a simple square canvas and a list of drawing tools on the left hand side. To see it work its magic, all you need to do is sketch a few simple lines, which would serve as a basis for your manga character. The app’s AI will then respond to your input by adding some details to the sketch, such as hair, eyes, facial expressions and so on.

In addition, it could help you to automatically colour the artwork as well. This is done by filling up the desired parts of the drawing with lines in a certain colour, which acts as an instruction for the AI. If you’re still uncertain on how the built-in tools work, Google has included a couple of demonstrations upon launching the Giga Manga app for your reference.

Granted, the app’s abilities may sound impressive on paper, but it is still way off from being a manga artist’s perfect assistant. While the demonstrations provided by Google’s would certainly impress visitors and aspiring artists alike, the actual results gained from using the app may not live up to expectation. During my own testing, Giga Manga continuously added more lines to my sketch, which ended up being a canvas full of chicken scratches. Maybe it’s the app’s way of telling me to just stick with my day job?

Jokes aside, the Giga Manga web app is first and foremost an experiment, so it’s meant for users to play around with. If you’d like to try it out for yourself, you may do so by launching the app on your web browser by tapping on this link.