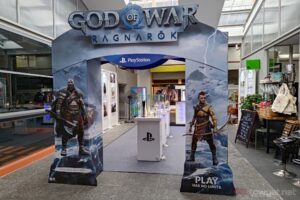 God of War Ragnarok launches tomorrow, on 9 November. There’s no midnight launch, but Sony Interactive Entertainment has prepared an exhibition for fans to check out not only merchandise of the game, but also art by famous artists in celebration of the launch.

The exhibition itself is located at APW Bangsar, and it’s pretty modest in its scale. That being said, it’s also the place to be to check out a number of tie-in products that God of War Ragnarok has going.

To start, this is where you want to be if you want to have a look at what the God of War Ragnarok special edition DualSense controller looks like. It’s locked behind a glass case, understandably so, but it’s worth taking a look if you’ve been on the fence about getting one for yourself. Also here are the #FR2 T-shirts and New Era caps, if you are into that sort of thing.

But beyond the physical merch, as mentioned earlier this is the place to check art that has been made in conjunction with God of War Ragnarok. Probably the first thing you’ll see as you enter APW Bangsar is the mural of Kratos and Atreus, but with a wayang kulit twist. Further in you will see a recreation of the scene where Kratos’ Leviathan Axe clashes with Thor’s Mjolnir from the recent State of Play trailer.

The star of the show among said art are the wayang kulit puppets made by Tintoy Chuo, on which the mural is based. Unfortunately, this won’t be staying here beyond today for the public to see, so you’ll have to make do with photos of it. The others are located at the exhibition grounds alongside the other merch.

If you intend to come check out the God of War Ragnarok exhibition for yourself, the merch and art will only be sticking around until 13 November. As for the mural and the weapon clash recreation, these will be around for quite a bit longer, until 7 December.