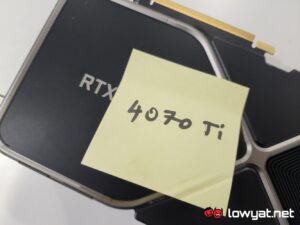 Ah, the NVIDIA RTX 4070 Ti. From its unceremonious “unlaunching” as the RTX 4080 12GB, to its “unofficial” redesignation into its current form, the last we heard about the card’s availability was that it could launch as early as 5 January next year. That launch date, by the way, may as well be treated as gospel, considering Gigabyte’s latest filing with the Eurasian Economic Commission.

The filing was discovered by Twitter user 포시포시 (@harukaze5719), who posted a screen of Gigabyte’s alleged RTX 4070 Ti list on the social media platform. In total, it comprises eight SKUs, ranging from its base-tier Eagle lineup, all the way up to its enthusiast-grade AORUS series, with the AORUS Master standing on the peak of the pyramid.

Needless to say, these names should seem familiar to fans and followers of the Taiwanese brand, given that it applies those same custom cooling options to all cards, past, present, and future. More to the point, while this isn’t an official confirmation by NVIDIA itself, the fact that the brand already has an EEC filing this close to the NVIDIA RTX 4070 Ti’s alleged launch date means that this is barely a coincidence too.

Besides the NVIDIA RTX 4070 Ti, Gigabyte also filed another, separate filing for AMD upcoming Radeon RX 7900 XTX and XT graphics cards that are expected to be available from 13 December onwards. Once again, we’re still in the dark about their performance, but its parent company has insisted that its Navi 31-powered cards will be giving the RTX 4080 a run for its money, both in its performance and price.

At this stage, we’ll simply say that we’ll just have to wait until CES 2023 next year, before we can hear anything from NVIDIA about its GeForce RTX 4070 Ti and whether or not rumours that it will be as powerful as the RTX 3090 Ti at launch is true.