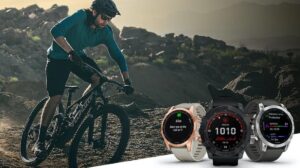 Garmin recently launched its new Fenix 7 series, together with an all-new Epix smartwatch which is a complete refresh of the original that debuted all the way back in 2015. As you may recall from a report we published last month, the design and some specifications of both line-ups were part of a massive leak shared by WinFuture’s Roland Quandt.

As previously suggested by Quandt, the new Garmin Fenix 7 series are available in three different sizes, namely the 42mm Fenix 7S, the 47mm Fenix 7, and the larger 51mm Fenix 7X. All three models are equipped with sunlight-visible, transflective memory-in-pixel touchscreen displays, feature fiber-reinforced polymer with stainless steel bodies, and are rated 10ATM in terms of water resistance. It is worth noting that the 7X model exclusively comes with a side-mounted LED flashlight, which also features a strobe light function for alerting motorists and bystanders when you’re out for a run – especially at night.

In addition, the brand also offers the trio in Solar and Sapphire Solar editions, where the latter comes with titanium bodies and sapphire displays for extra durability. As the names suggest, these variants of the Fenix 7 series are equipped with solar charging capabilities, which are touted to have 54% more solar surface area when compared to the solar versions of their predecessor.

In terms of battery life, the company says the Fenix 7S is capable of lasting up to 90 hours for the standard version and 162 hours for solar. The vanilla Fenix 7 is said to last up to 136 on standard and 289 on solar, whereas the larger 7X model could last up to 213 hours and 578 hours respectively.

Next up is Garmin’s next-gen Epix rugged smartwatch which now comes with a circular 1.3-inch always-on OLED touchscreen display, a single 47mm size, and comes in two finishes: Sapphire glass with either black or white titanium body, or Slate Steel. Much like the Fenix 7 Series, it is also rated 10 ATM in terms of water resistance.

Similarly, the Epix includes the same smart functions, fitness and health related tracking and features, as well as satellite navigation support. Garmin says the new smartwatch is capable of lasting up to 16 days on a single charge, and up to six days with the always-on display enabled. Unlike the Fenix 7 Series, however, the next-gen Epix does not feature solar-based charging.