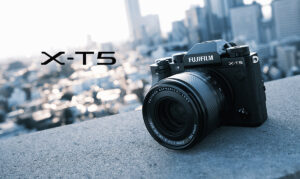 Fujifilm has officially unveiled the X-T5, its latest X-T series APS-C shooter since the launch of its predecessor back in 2020. It packs a larger sensor, numerous improvements in features, and is also touted to be the series’ smallest model yet.

Despite featuring a similar design to the X-T4, the newer camera is actually much smaller and lighter; measuring at 129.5 x 91 x 63.8 mm and weighing in at approximately 476 g. It is also durable, featuring an Ultra Sonic Vibration sensor cleaning system as well as 56 weather-sealed points for high levels of dust and moisture resistance. Fujifilm adds that the camera is capable of operating in temperatures as low as -10 Celsius.

Found in front of the device is a mount that supports the brand’s X lenses, while situated at the back is a 0.5-inch OLED electronic viewfinder with a built-in eye sensor and 3.69 million-dot resolution, and also a 3.0-inch three-directional vari-angle LCD monitor with 1.84 million-dot resolution. As for terminals, the X-T5 comes with ports for USB-C and HDMI Micro (Type D), a SD/SDHC/SDXC/UHS-II/UHS-II/V90 card slot, as well as microphone and headphone jacks. Additionally, it also supports Bluetooth 4.2 (BLE) and Wi-Fi connectivity, and includes an NP-W235 Li-ion. The latter allows the device to last up to 580 frames of image capture and approximately 130 minutes of 6.2K and 4K video recording on a single charge.

Under the shooter’s hood is a fifth generation 40.2 MP X-Trans CMOS 5 HR APS-C sensor with primary colour filter, which is accompanied by Fujifilm’s X-Processor 5 chip. Also onboard is a five-axis IBIS system that provides seven stops of compensation, an ISO range of 125 to 12800 (extendable up to 25600), as well as single and continuous autofocusing (AF) with Intelligent Hybrid AF, face/eye detection, and subject (animals and vehicles) detection.

The X-T5 is capable of capturing 15 frames per second (fps) with the mechanical shutter and 20 fps with the electronic shutter. Additionally, Fujifilm says the former can capture at speeds up to 1/8000 second and has a 500,000-cycle lifespan, whereas the latter has a maximum speed of 1/180000 second. When used together with the onboard IBIS system, the camera can generate a combined image of more than 160 MP by combining 20 frames together via the Pixel Shift mode.

In terms of video capabilities, the new APS-C shooter is able to record 6.2K video at 30p in 4:2:2 10-bit colour, and oversamples footage in 4K HQ mode. Besides that, it can also record RAW video as 12-bit Apple ProRes RAW at up to 6.2K resolution and up to 29.97p when paired together with an ATOMOS recorder.

According to Fujifilm Malaysia, the recently unveiled X-T5 is expected to arrive for the local market later this month, with pre-orders now available starting today until 13 November 2022. For body only, the new camera is priced at RM 8,648, while pairing it together with the XF18-55 mm and XF16-80 mm kit lenses will set you back RM 10,688 and RM 11,198 respectively.