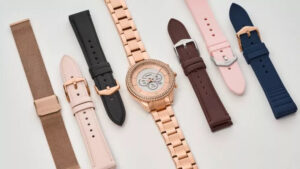 Watchmaker Fossil has launched a new hybrid lineup of its Gen 6 smartwatches. This particular variant attempts to bring the best of both the functionality of smartwatches and the look and feel of traditional watches.

The watch is powered by an Intel Atom processor which is a significant downgrade from the regular Gen 6 smartwatch’s Qualcomm Snapdragon Wear 4100+ chipset, but then again, a hybrid shouldn’t require nearly as much processing power. On board, there is 16MB of storage and the company does not mention how much RAM is available.

The smartwatch, which is compatible with both iOS and Android, has physical minute and hour hands and an actual dial. The hybrid part comes right in the middle with a display underneath the hands, which can display the dashboard and other information aside from the watch face. Both the watch band and watch face can be personalised.

Despite looking like a regular watch, it also has a lot of built-in basic health and fitness features such as an activity tracker, being able to challenge friends to a workout, heart rate tracking, SpO2 blood oxygen level tracking, visualised workout routes, and you can even see your workout stats on the accompanying Fossil Smartwatches app. The Gen 6 Hybrid smartwatch is also certified with 3 ATM water resistance.

The watch can be used for controlling music on your phone, displaying notifications and has a built-in Alexa smart assistant, but the company doesn’t mention the latter for the Malaysian market. In terms of battery performance, Fossil claims that it can last up to two weeks on a single charge, which is definitely a huge leap over the regular Gen 6’s 24-hour battery life. Charging-wise, it is claimed to take 60 minutes to fill up from empty to 80%.

The Fossil Gen 6 Hybrid is available now via the Fossil website with a starting price of RM1,079 for leather and silicone straps and RM1,129 for the variant with a metal bracelet. Only the leather variant has a 41mm case size, while the rest features 45mm cases.