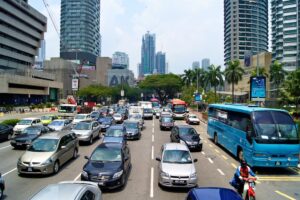 Commuters in Klang Valley apparently spend at least 44 hours per month being stuck in traffic jams. This is according to a claim by UiTM lecturer Dr Ismaniza Ismail, who estimates that employees are forced to be trapped in their vehicles for one to two hours every day on their journey to work.

Ismaniza said that while work is only eight hours a day, workers actually lose a couple of hours during their commute. This leads to many employees having to wake up and leave very early in an attempt to avoid getting stuck in traffic jams.

The issue is not just one that plagues workers’ personal lives, but one that also affects productivity costs. The lecturer estimates that when factoring the average hourly wage of RM7, two hours a day multiplied by 22 working days results in RM308 of wasted productivity every month.

She also mentioned that being stuck in traffic jams can take a significant toll on workers’ physical, mental, and emotional health, not to mention possible back pain from sitting in cars for too long. Ismaniza gave a reminder that stress can affect the emotions and productivity of employees, thus also affecting the workplace.

The lecturer opined that public transport services become more reliable but until then, flexible working arrangements are one of the solutions that employers can adopt to reduce employees’ stress that can come from worsening traffic congestion. She explained that flexible hours and working from home arrangements not only reduce stress but also increase productivity.

Coincidentally, the government passed an amendment to the Employment Act earlier this year which will come into force on 1 September. With the amendment, employees are allowed to formally request flexible working arrangements that include working hours, working days, and even the location of work. Employers must give a written reply within 60 days and must state the reasons why if the application is rejected.